Wonderfully rich and creamy, this corn chowder is slightly “lightened up”, yet chock-full of fresh sweet corn, diced potatoes, red bell pepper, and a touch of spice for a bit of kick! 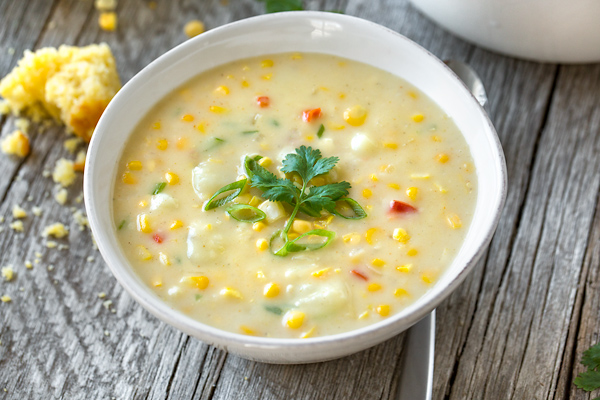 In our household, we don't take any breaks from enjoying hearty and nutritious soups in the warmer months.

As a matter of fact, I make a lot of soups during this time of year.

Soups are quick-cooking, convenient, and the perfect one-pot meal when something hearty and filling yet still fairly light is what we're hungry for.

Because I really love to add lots of vegetables to my soup pot whenever whip up a tasty homemade soup recipe, I tend to favor those veggies that happen to be “in season” and plentiful during the particular time of year that I find myself in.

And because corn is one of those ingredients that is beautifully abundant at the moment, and quite sweet and crisp, preparing a comforting corn chowder is just the perfect thing!

Filled with fresh corn, little chunks of diced potatoes, finely diced red bell pepper and a little bit of spice for a touch of extra flavor and “heat”, a bowl of corn chowder is definitely my idea of coziness in a bowl, and the perfect companion.

And here's a wonderful little charm about corn chowder: it can easily be modified to be on the lighter side! 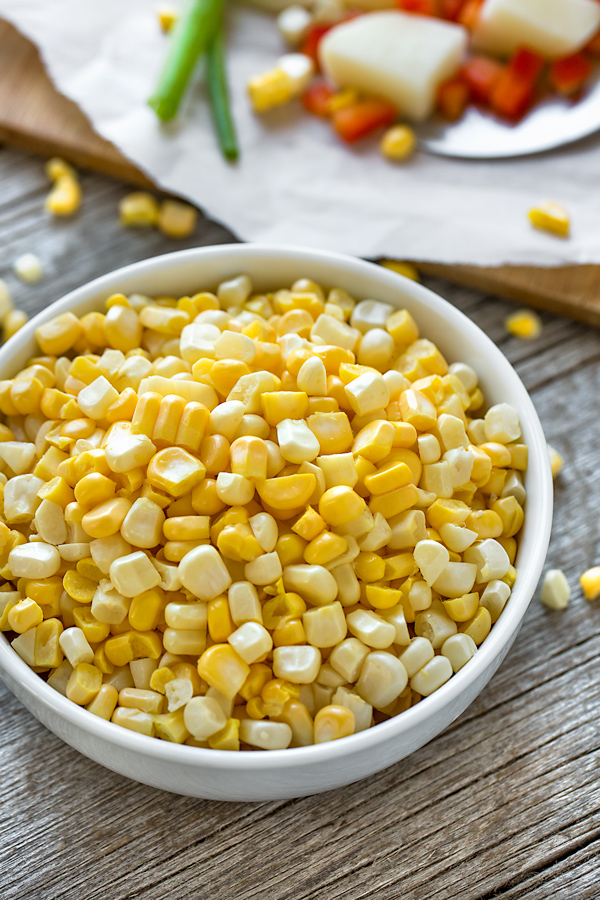 Corn Chowder on the Lighter Side

While many recipes have whole milk or cream as a base for a corn chowder recipe, I like to go a bit "lighter" when I prepare mine.

While I do still add in some dairy to my corn chowder recipe, by way of a splash of half and half or cream at the end (for a little touch of something “velvety”), I actually like to use chicken broth (or even vegetable broth to go completely vegetarian) as my “base” liquid instead.

I still prepare a roux to use as a thickener (a mixture of equal parts butter and flour cooked together); but I add my chicken broth to that roux instead of a heavy cream or whole milk.

The results are incredibly velvety and creamy without being too heavy—the perfect combo!

How to Make Corn Chowder

There are only a few steps to making delicious homemade corn chowder from scratch, filled with sweet seasonal corn kernels, and a handful of other delicious ingredients, so flavorful and filling.

This velvety and cozy corn chowder is spectacular served with corn bread or biscuits, and you can even sprinkle in some cheddar cheese! 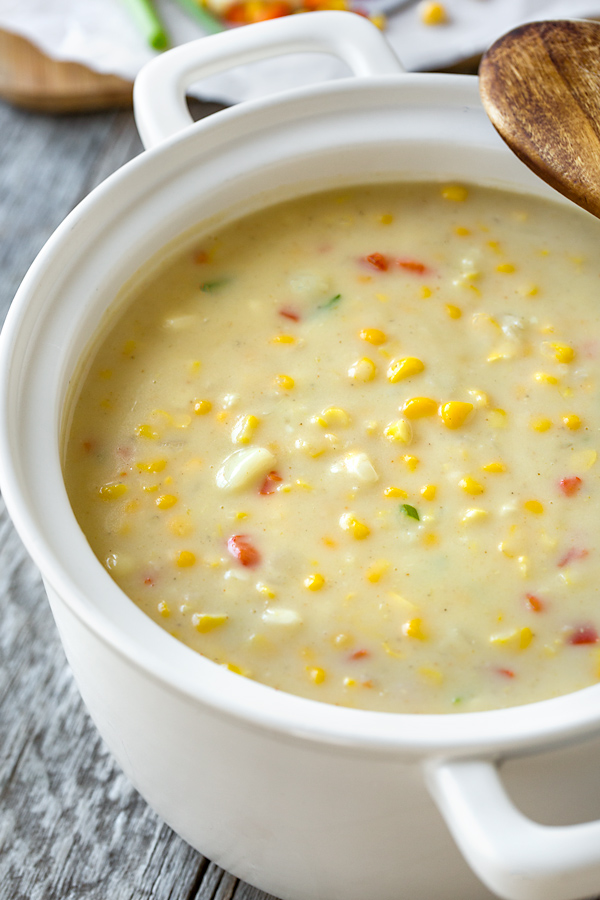 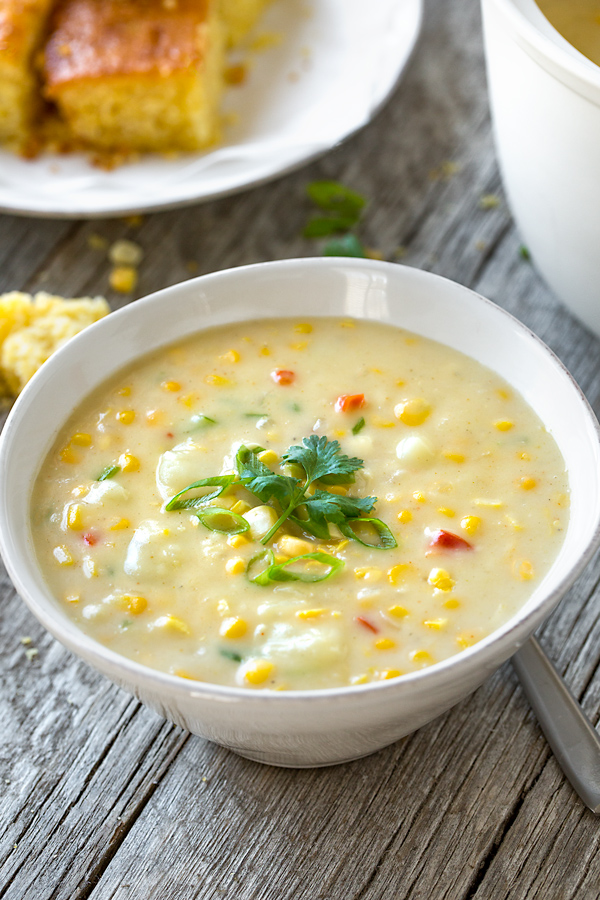 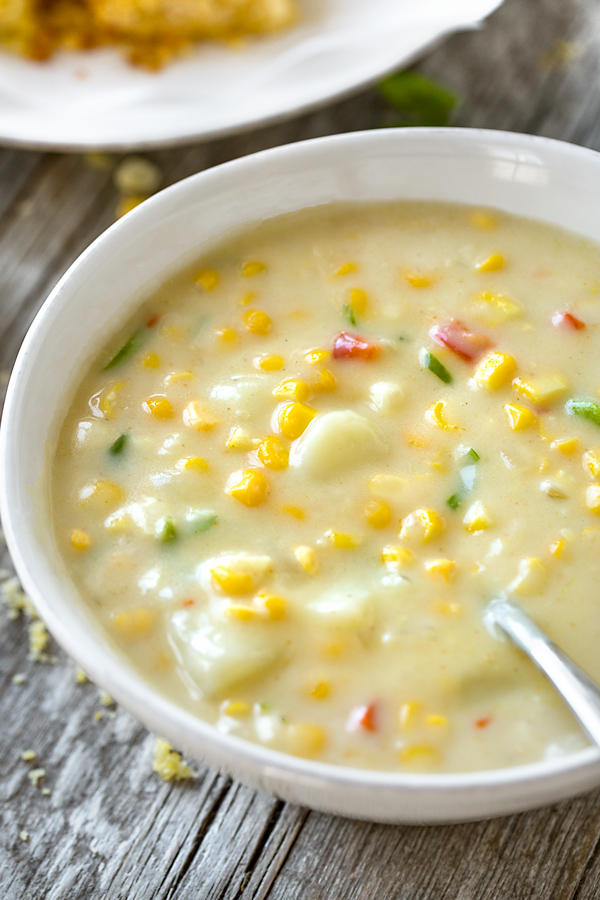 This deliciously rich and creamy corn chowder is filled with diced potatoes, red bell peppers and a sprinkle of green onion—it's coziness in a bowl!

-Place a medium-large soup pot over medium-high heat, and add in the butter; once melted, add in the onion and the red bell pepper, and stir those in to soften for a few minutes.

-Add in the garlic along with the coriander, smoked paprika, cayenne, black and white peppers, and stir to combine; once aromatic, add in the flour and stir that in until it becomes paste-like, about 30 seconds.

-Add in the chicken stock, whisking all the while to avoid lumps from forming until smooth and blended.

-Add in the potatoes and the 4 cups of corn kernels, bring the soup to a vigorous simmer, then cover and allow it to gently simmer for about 20 - 25 minutes, or until the potatoes are tender.

-Remove from heat and stir in the cream or the half and half, and then stir in about half of the chopped green onion.

-Serve garnished with a small sprinkle of the remaining ¼ cup of fresh corn kernels, some green onion, and some cilantro leaves. (You can even sprinkle in some cheese, if you desire!)

Hungry for more tasty soup recipes? Check out this Chicken Chowder, this Vegetable Soup, or this Curried Lentil Soup!

« From the Heart: Extending Some Grace
Shrimp Scampi »