With their soft and fluffy interior, their golden-brown and crispy exterior, these scrumptious hash brown potato cakes make for a delicious savory breakfast side! 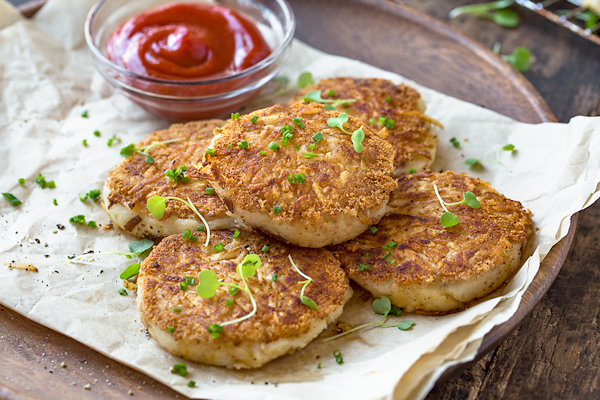 While on a recent trip to Cambria California, my husband and I stopped for breakfast at a quaint little restaurant to get some strong hot coffee and some good food into our hungry bellies.

We had been up since 4:30 am that morning, and while I had made myself a cup of coffee before we left, my husband had not; and he was feeling every bit of the absence of caffeine.

By the time we stopped for breakfast, it was around 10:45 am.

We couldn't wait to check out the menu and get some refreshment.

And we knew right away that the food was most likely going to be amazing by how absolutely delicious the coffee was. The more we perused the menu, the more we were excited to sample the fare!

I ended up choosing the amazing looking French toast; and because I was also craving something savory, I ordered the hash brown potato cakes as well—I was both hungry and curios.

And let me tell you, these little hash brown potato cakes were some of the most delicious hash brown-style breakfast potatoes I had ever eaten! The French toast was pretty spot on as well!

When I sank my fork into those golden, patty-like potato cakes, I was expecting them to be what hash browns typically are—crispy and flat. But these were almost “fluffy” because of an extremely brilliant addition: mashed potatoes!

They were totally unique and delicious!

I knew I had to play around in my kitchen to come up with my own recipe so I could enjoy it whenever I longed for a taste of our special little trip (or have some leftover mashed potatoes to use up!). 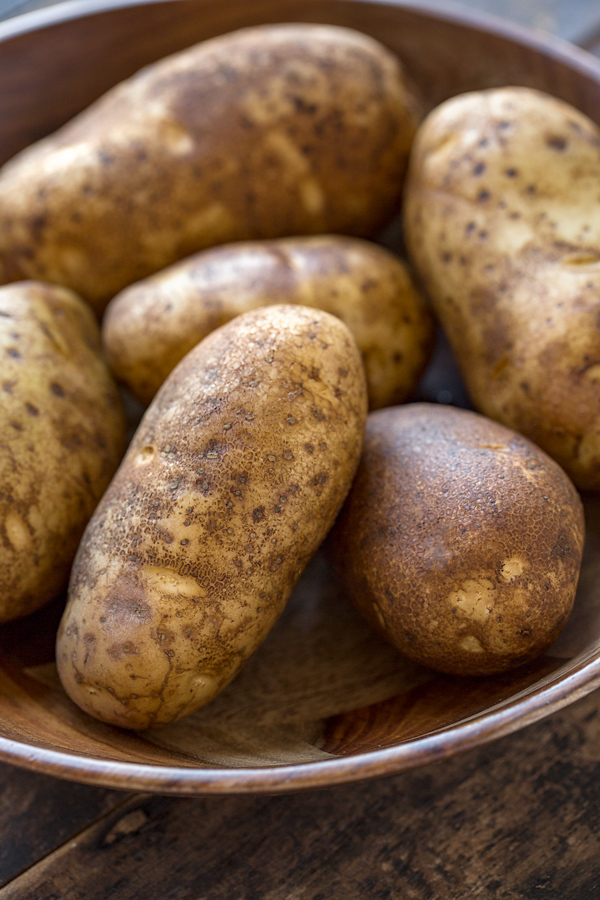 Hash brown potato cakes are basically a combination of mashed potatoes (which I'm almost certain was the restaurant's creative way of using up their leftover mashed potatoes) and grated fresh potatoes, plus a bit of seasoning for extra flavor.

And that's what makes this savory recipe extra amazing—it's a great way to use up your own leftover mashed potatoes and turn them into a whole other meal.

Thick and creamy, the mashed potatoes act as a binder; and when you shape them into patties or “cakes”, then gently press them into seasoned, freshly-grated potatoes, and sear them in a hot skillet until golden-brown, you've got these tasty hash brown potato cakes.

In order to get that nice crisp exterior to compliment that fluffy and tender interior, I like to use my cast-iron skillet—it gets nice and hot, and caramelizes or sears the outside of these cakes perfectly.

You can even shape them the evening before you'd like to serve them for breakfast! Simply cover them in plastic wrap and keep them in the fridge, then fry them up the next morning.

These hash brown potato cakes are delicious on their own, or served the traditional way: with a drizzle of ketchup! 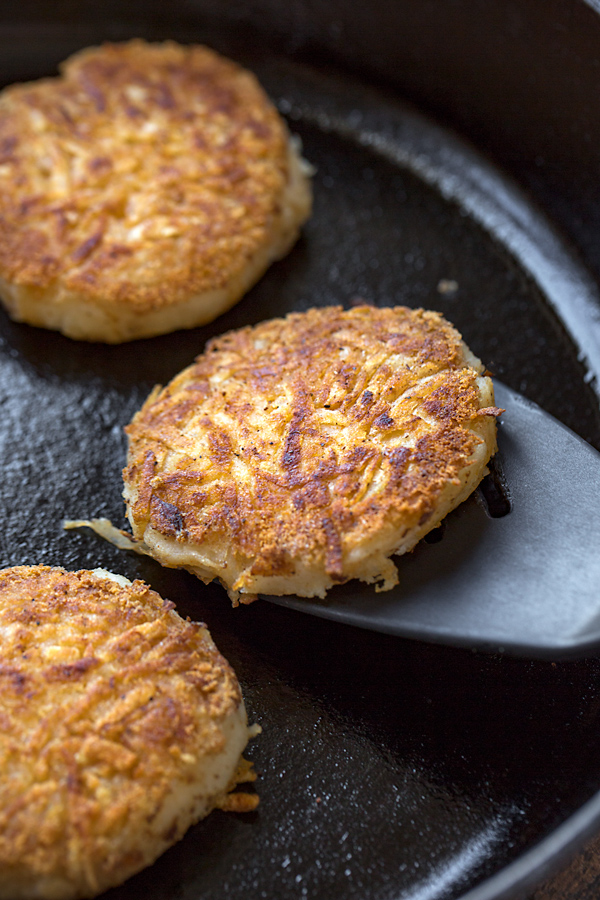 And if you'd like to prepare a small batch of mashed potatoes just for this recipe, here's what you'll do: 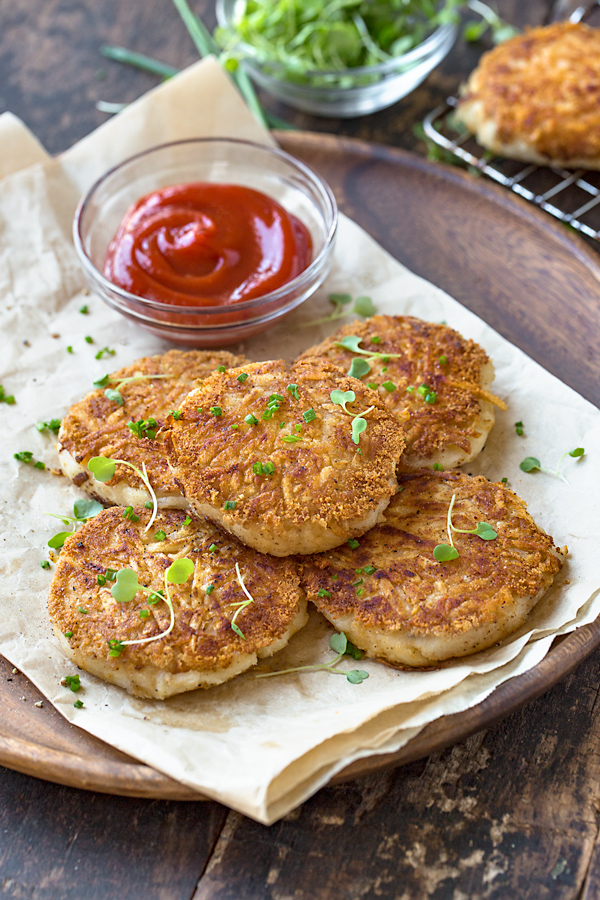 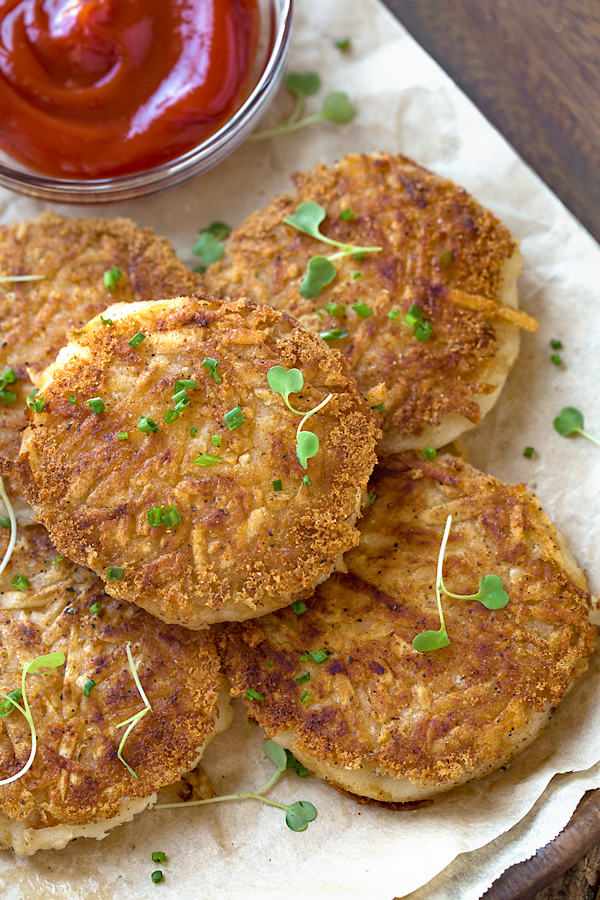 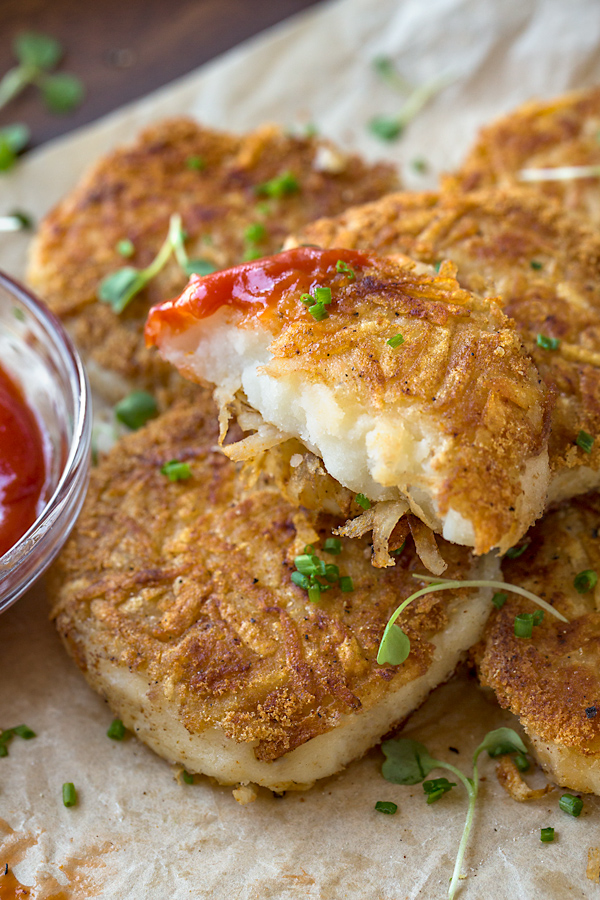 These golden hash brown potato cakes are crispy on the outside and fluffy on the inside—they're the perfect savory breakfast companion!

(*if you don't have any leftover mashed potatoes to use for this recipe, then see right after the “Tips and Tidbits” above for an easy small-batch recipe)

-Use a ¼ cup measuring cup to portion out 8 generous little mounds of mashed potatoes, and shape those mounds into cakes or patties (about a ½" thick") by gently pressing them between your palms; set aside.

-Add your grated russet potato to a fine mesh strainer, and rinse thoroughly with cold water until the water runs clear; squeeze as much water from the grated potatoes as you can by hand.

-Add the squeezed out grated potatoes to a clean kitchen towel, and squeeze any remaining water out of them so that they are as dry as possible, then gently toss to loosen; add the grated potatoes to a bowl and sprinkle in the small pinch of salt, the granulated garlic, the paprika and the pinch of black pepper, and toss to combine. (If your mashed potatoes are already quite salty, skip adding in the salt.)

-Take each little mashed potato cake, brush both side of it very lightly with some of the whisked egg, and press it into the seasoned, grated potato mixture, gently turning to coat both sides in grated potatoes; repeat with all potato cakes, setting them aside on a platter to hold.

-Place your cast-iron skillet (or other heavy-bottom pan) over medium-high heat, and add in about 3 tablespoons of ghee, avocado oil, or an oil of your liking; allow the oil to get hot.

-To cook, work in batches to fry the hash brown potato cakes in the hot skillet for about 5 minutes per side or until golden-brown, gently pressing down on them in the pan (they can be a bit delicate, so take care when flipping them over); repeat with remaining cakes.

-Serve immediately fresh out of the skillet, or keep warm on a parchment-lined baking sheet in a warm oven until ready to serve.

Interested in more tasty potato recipes? Check out these Roasted Potatoes, or this Sweet Potato Hash!