Bright in flavor and full of delicious texture, this panzanella is filled with toasted ciabatta bread, ripe juicy tomatoes, mozzarella, basil, onions and olives—it's a tasty twist on the traditional Tuscan version! 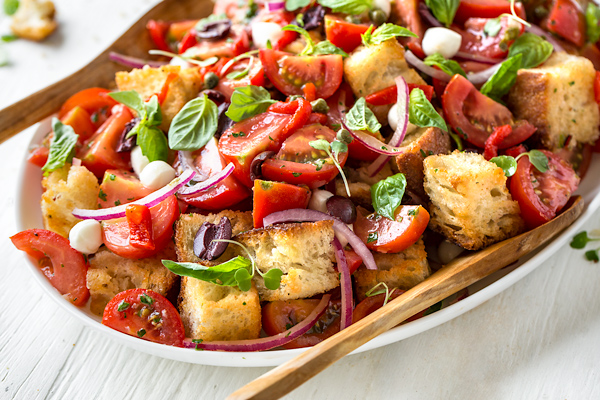 When I think of a basic panzanella with its rustic bread, tomatoes, onions, and tangy-salty vinaigrette, it makes my mouth water.

These flavors and textures together are such a unique and delicious treat, and a great way to make use of the bounty of tomatoes this time of year.

Panzanella is a Tuscan salad, and typically it includes little else than tomatoes (along with their juices), onions and stale bread that has been soaked in water and then squeezed out and torn into pieces.

And all of this is traditionally dressed with nothing more than olive oil, some salt and pepper, making for a scrumptious “bread salad” that has lots of flavor and body.

It's wonderfully filling and flavorful!

But when I recently got a craving for a big beautiful bowl of this refreshing, hearty, and tasty Tuscan staple, I decided to make my own “updated” version with toasted cubes of rustic bread and a few more ingredients to tweak things slightly from the traditional.

Personally, I'm not the biggest fan of the traditional soaked, stale bread; so I prefer to use ciabatta bread, cubed and tossed with olive oil, then toasted in the oven until golden and crisp.

I allow the bread to cool before adding it to a combination of ripe, juicy tomatoes, red onion, capers, roasted red peppers and briny olives tossed in a simple vinaigrette that's nice and tart and garlic-y.

And to finish off my panzanella recipe, I tear up some fresh basil leaves and top it with some delicious pearl mozzarella—so scrumptious and flavorful! 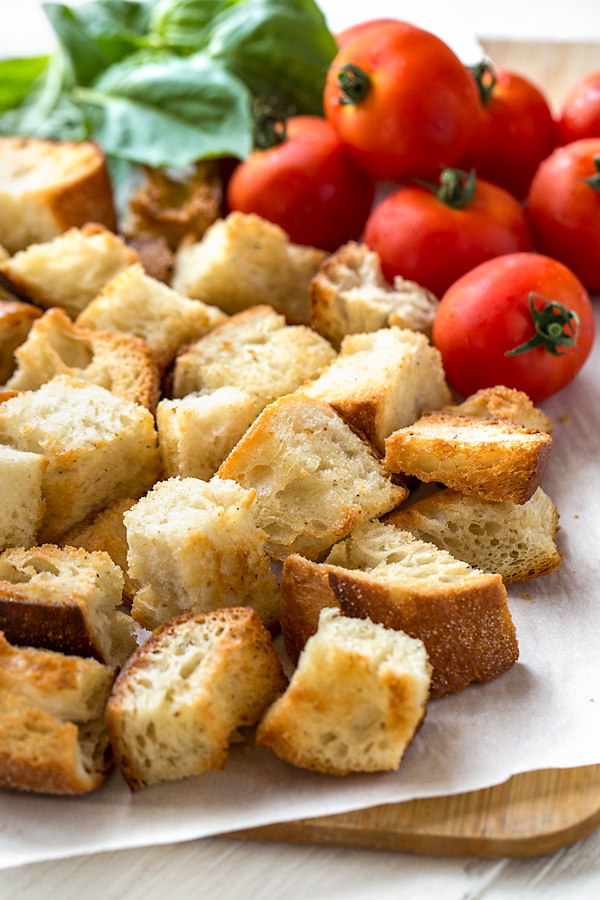 How to Make Panzanella

Because panzanella is such a wonderfully rustic salad, there truly is no “set” way to prepare it, or exact amount of ingredients, per se.

Everyone seems to have their own way of prepping it (some folks allow the panzanella to rest for a while, some serve immediately), and the beauty of it is that you can make it according to your personal tastes and preferences.

For example, if you like a bit more bread, you can add more bread; if you like more tomatoes (and other ingredients), add more of those. The ratios are pretty much up to you.

You’re basically looking to combine everything together in order for those savory, tangy and mildly sweet flavors to come together and mingle so that each and every bite has lots of flavor!

Here's how I make my panzanella:

Believe it or not, the bread doesn't get as soggy as you might think it would; it simply soaks up the juices and the vinaigrette, and takes on all those savory and delicious flavors that make up this unique and delicious salad! 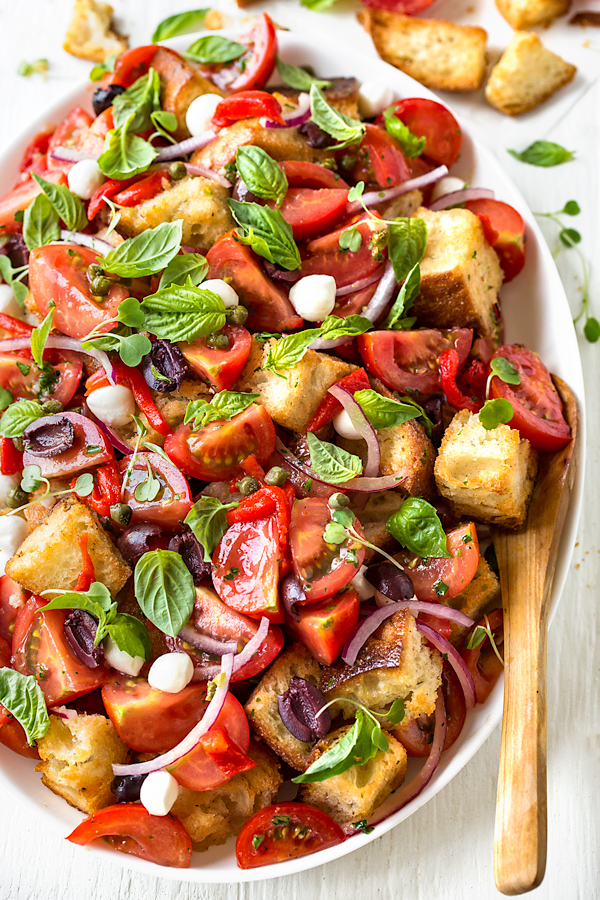 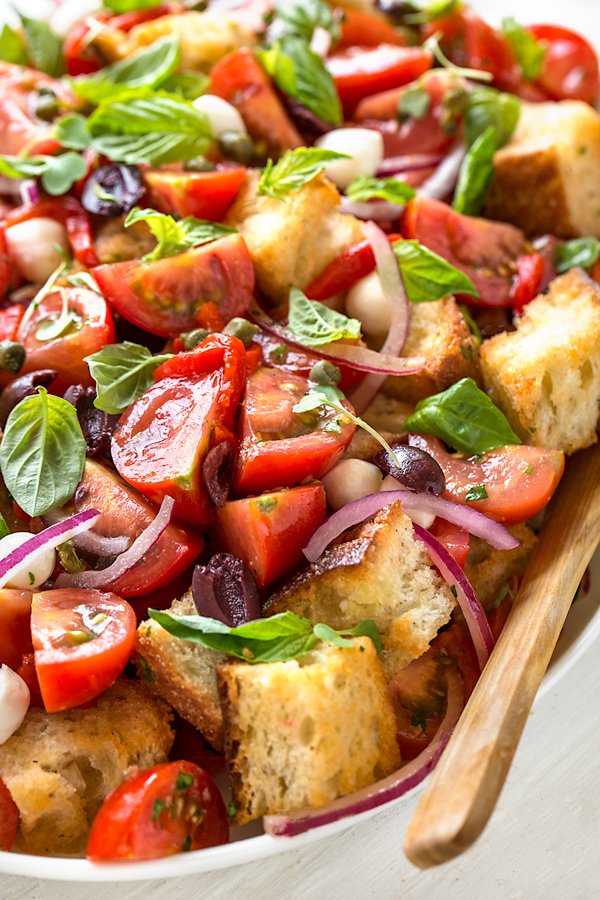 -Preheat the oven to 400°, and line a baking sheet with parchment paper.

-Evenly drizzle the bread cubes with the ¼ cup olive oil, and add in a good pinch of salt and pepper, and toss to combine; turn out onto the baking sheet and toast for about 15 minutes, stirring a couple of times, until golden and crisp; remove and allow to cool.

-While the bread cubes are cooling, prepare your vinaigrette ingredients by placing them into a mason jar and shaking vigorously; set aside.

-Once the cubed bread is cooled, place your tomatoes, parsley, sliced red onion, sliced roasted red pepper, olives and capers into a large bowl, and add a pinch or two of salt; then, drizzle in the vinaigrette and toss gently to combine.

-Add in the cooled toasted bread and gently fold that in to incorporate it into the tomato/vinaigrette mixture, then turn out onto a platter to rest/chill in the fridge for 30 minutes.

-When ready to serve, top with torn basil leaves and the pearl mozzarella, and serve with some extra olive oil to drizzle over top as a finisher.

Interested in more tasty salads? Check out this Avocado Salad, this Steak Salad, or this Greek Salad!

« Peach Galette
From the Heart: Extending Some Grace »