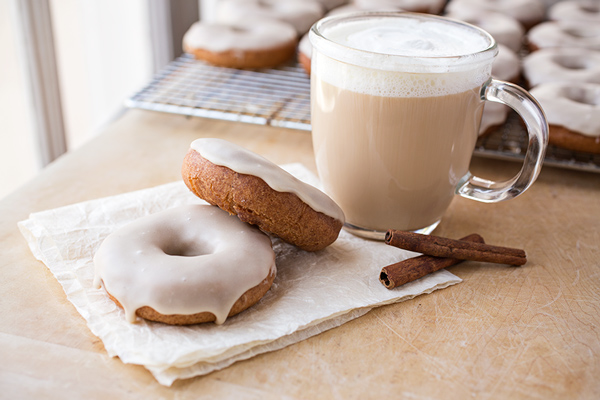 Lately, I've been seeing a lot of “baked” doughnut recipes appearing all over the web-o-sphere, and certainly those have their place; it's just not on my plate when my tastebuds are craving that specific flavor that only the good ol' regular fried doughnuts can offer. And my tastebuds have been craving that, let me tell you. 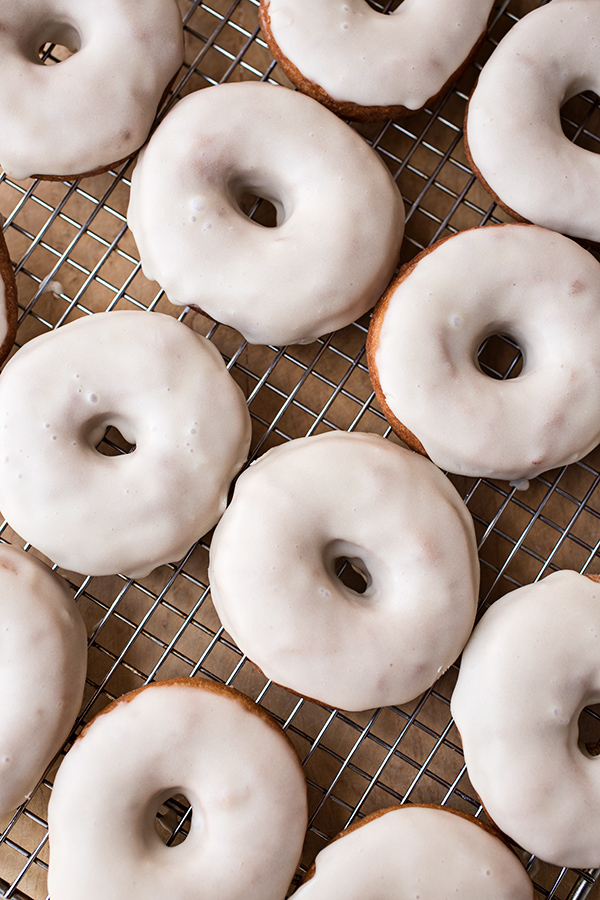 The other day I was tempted to drive over to our local Yum-Yum's doughnut shop and pick out a bunch of moist, cakey treats, but then I had this clever idea: “Why don't I make some at home, and share 'em on the blog for others to enjoy? How hard can it be?” 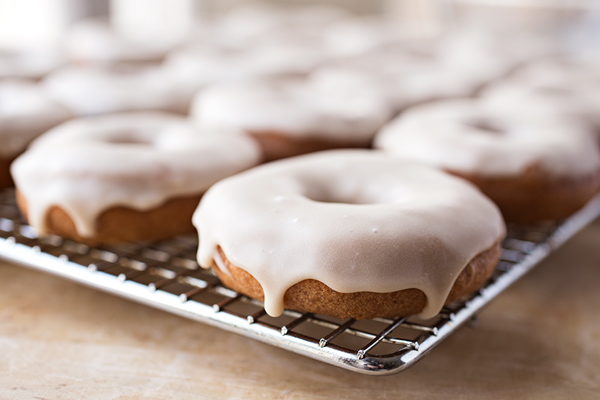 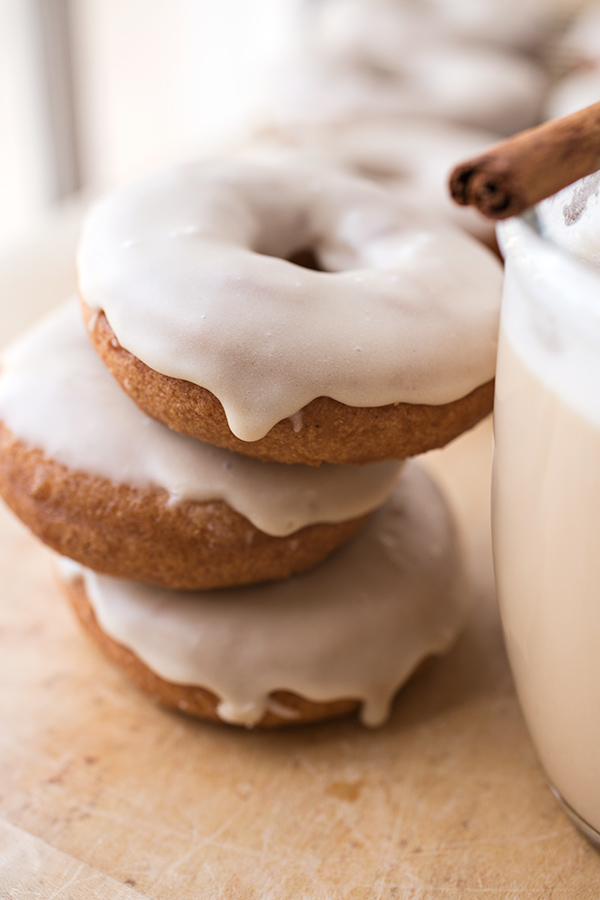 And so my adventure with making homemade doughnuts began.

In order to paint as accurate a picture as I can for you, you need to understand that I have zero experience making doughnuts from scratch in my own kitchen, a.k.a. my “lab”. The one time I prepared from-scratch doughnuts was back in culinary school over 11 years ago during "Baking, Pt. One", and that was an utter blur, as everything was being timed and graded.

But being someone that likes a challenge—especially a challenge of the culinary kind—I figured I'd use my doughnut craving to learn (and hopefully master at the end of it all) something new. So on-line I went, and scoured dozens and dozens of basic doughnut recipes, and watched videos of various folks preparing them. I wrote out a good “starting” recipe for myself, gathered up my ingredients, and had a go at my first batch. 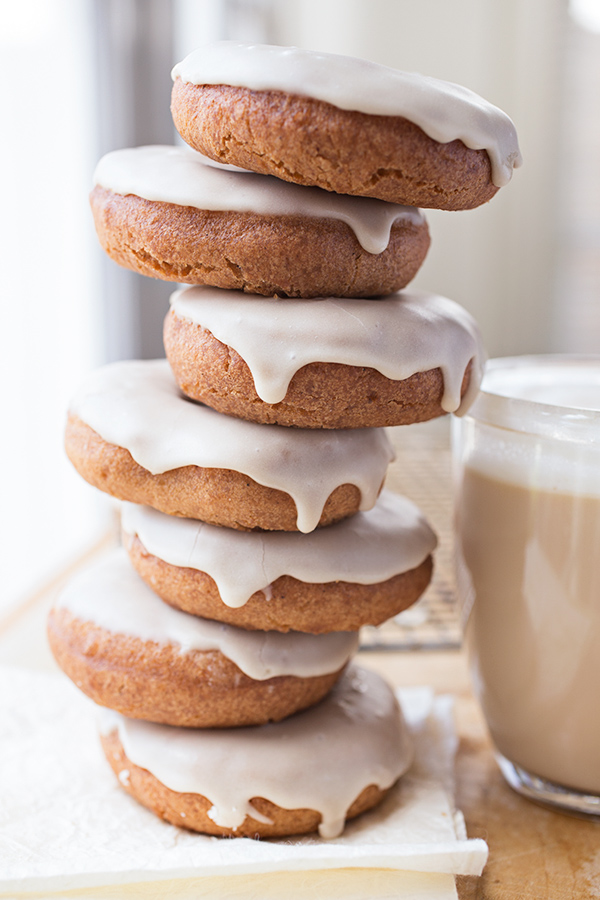 Now, in full disclosure, I really didn't know quite what I was looking for in terms of the flavor/texture of the dough, so I went in rather blindly. And let me tell you, the finished product for that first batch sure tasted like it.

The doughnuts sort-of puffed up when I dropped them into hot oil, but I ended up frying them for too long and they got too “crusty” on the outside, and not cakey and moist enough on the inside. I also wasn't the biggest fan of the flavor of these, as I was attempting to do a chocolatey/coffee type of thing, but it just wasn't quite strong enough, or interesting enough.

Actually, it was rather “blah”, to put it poetically.

So on to round two. 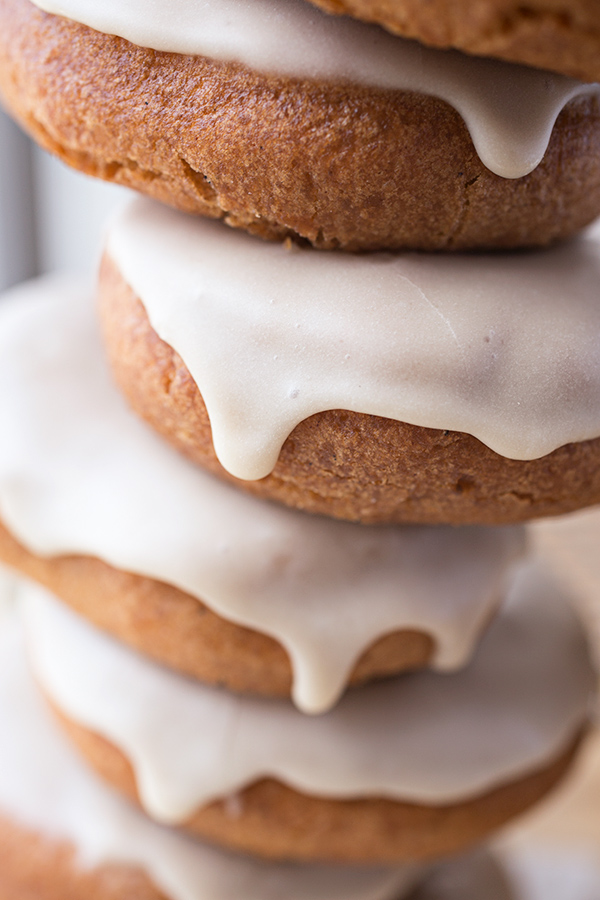 I figured I'd try to boost the chocolate this time by adding cocoa powder, and thought that perhaps “tightening up” the dough a bit more would be better so that it would be easier to handle and fry. And so this second attempt? Worse than the first!

Once again I burned the outside (these doughnuts were already chocolatey colored to begin with and almost impossible to tell if they were “done”), and this time, to my dismay, they were even more hockey puck-like than the first batch! (Yeah, great idea “tightening up” that dough.)

So sadly, straight into the trash they went. 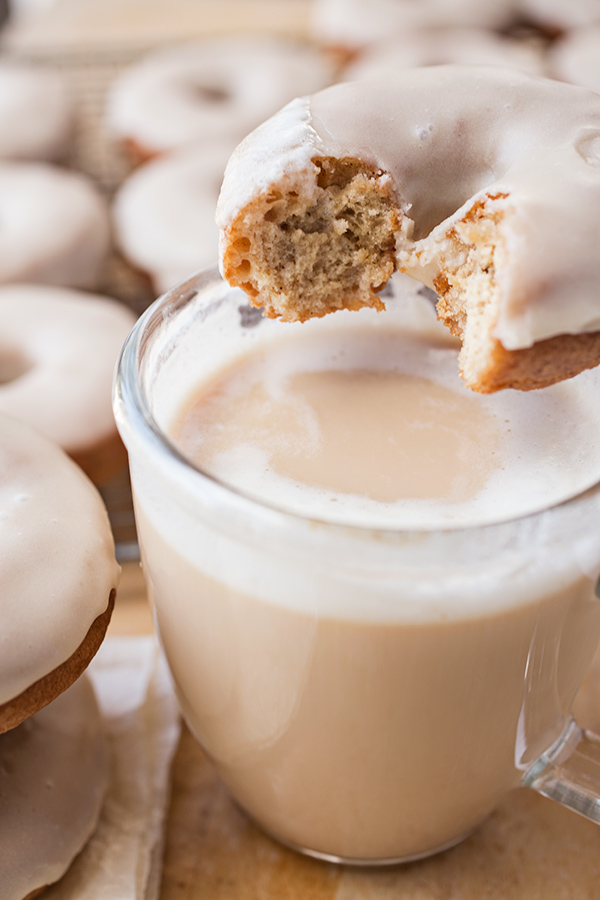 I felt dejected and quite defeated by these darned doughnuts, but I still hadn't gotten my doughnut “fix” handled. Plus, I'm stubborn, too. I'll be the first one to tell you I get obsessive over developing a recipe. So back to the drawing (or should I say dough) board, back to studying up on consistency, technique, and all the rest. I was determined.

I promised myself that if this third attempt didn't pass muster, I'd just give in and go the “baked” variety route where I wouldn't have to worry about the frying process and that “burned” flavor. Going into it for a third time, I told myself not to fear “soft” or “sticky” dough (it needed to be like that if these cake doughnuts were to be moist and soft-textured, like shop-bought), and to go with a totally new and really tasty flavor idea. I also needed to approach this batch with utter patience and time, plus real, genuine love and intention. 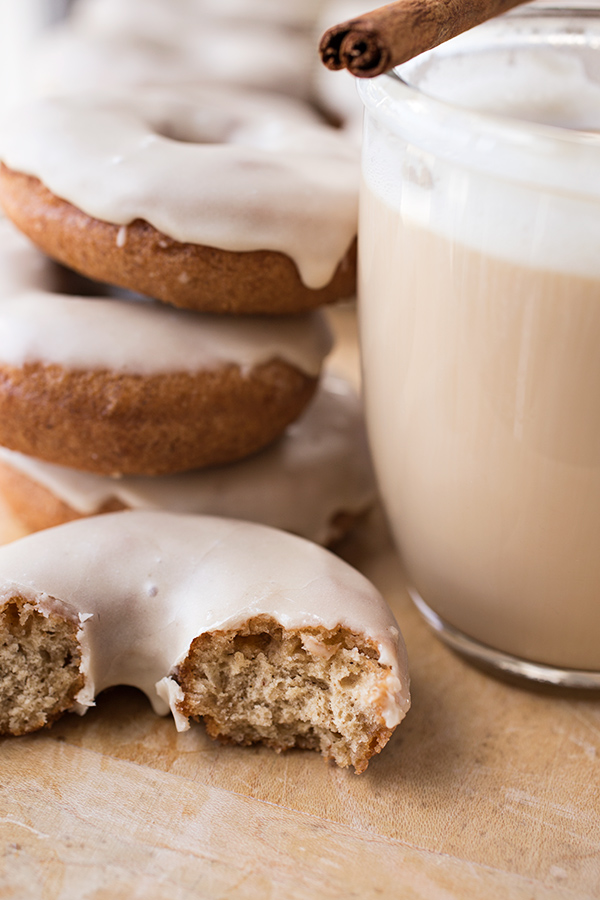 And so I did. And can I tell you? These turned out to be some of the best doughnuts my husband and I have ever had. Moist, light and perfectly cakey.

This time around, the dough was soft and supple, and they puffed beautifully in their hot oil “bath”, only taking about 1 minute per side. I finally had a winner! And I can't tell you how relieved I was.

So at the end of all of this, I'm very glad that I'm not having to report to you that I was ultimately bested by a doughnut, the very thing that I adore so much. But I sure came close.

And you yourself won't be bested by a doughnut recipe either, if you give this one a spin. These have all of that doughnut-y flavor, and taste like they're from a gourmet bake shop made with high-quality ingredients. Black tea-infused and loaded with real vanilla, sweet aromatic spices and drenched in a rich, creamy vanilla glaze, these are the perfect breakfast or afternoon treat to have for a little escape with an accompanying fragrant Chai Latte or even a good, strong, traditional cup of joe.

I felt compelled to share this silly little experience with you so that you'd know that I go through stuff like this often, especially with baking/pastries. Not many things are stellar on the first, or even second, try. But with fingers crossed and some divine luck, perhaps the third try will indeed be the charm. 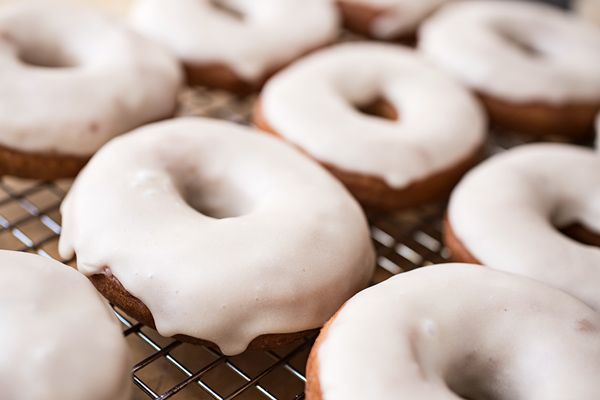 -Add the half and half into a small saucepan, and heat just until gently bubbling on the sides; turn off the heat; add in the 4 black tea bags, and steep for about 10-15 minutes; remove tea bags, squeezing them out to get as much flavor as possible, and allow the infused half and half to cool to room temp.

-To a medium-large bowl, add the flour and the rest of the ingredients through the ground ginger, and whisk to blend and aerate; set these dry ingredients aside for a moment.

-To another large bowl, add the sugar and the eggs, and using a hand mixer, mix on medium-high until very thick and pale, about 2-3 minutes; add in the vanilla extract and the melted butter, and mix again until incorporated.

-Place a piece of plastic wrap directly onto the dough in your bowl, and place into the fridge for about 1 hour.

-After an hour, prepare your work space to roll and cut out your dough by sprinkling a little flour over your work surface.

-Add your oil to a large Dutch oven or heavy bottom pot (it should come about 2” up the sides), and begin to slowly heat your oil to 365° (use a thermometer for accuracy).

-While oil heats, carefully turn out the dough onto your lightly floured work surface (sprinkle a little extra on top of the dough, if necessary) and using a lightly floured rolling pin, gently roll the dough to about ½” thickness.

-Once oil is hot, work in batches by adding in about 3-4 doughnuts, and allow them to fry on that first side for about 1-1 ½ minutes, or until lightly golden-brown and puffed, then flip (using tongs) and allow to fry on the other side until golden; remove and allow to drain on paper towel-lined cooling racks; repeat until all doughnuts are fried.

-If you're frying the doughnut holes, fry for about 30 seconds, moving them around to fry all sides, or until golden; allow those to drain, as well.

-Allow the doughnuts/holes to cool completely before glazing.

-Dip each doughnut liberally into the Creamy Vanilla Glaze, lift, and allow any excess to drip off; set aside on the wire cooling rack to allow the glaze to set up; repeat until all are glazed.

-Add all ingredients into a medium-size bowl, and whisk together until the mixture is smooth, glossy, thick and creamy; cover with plastic and keep at room temp until ready to use.


« Fettucini in Sausage Bolognese, And The Importance Of Being Both A Hungry Guest & A Good Host
Cheesy Southwestern Four Potato & Veggie Casserole, A Colorful And Flavorful Mosaic To Feast On »