These maple donuts are just like the kind you'd get from a gourmet donut shop or bakery! Wonderfully moist and cakey, and kissed with a hint of nutmeg for that classic flavor, these delicious homemade donuts come with the option to be jazzed up with the addition of crispy bacon if you're feeling adventurous, or left “naked” with only their sweet maple glaze! 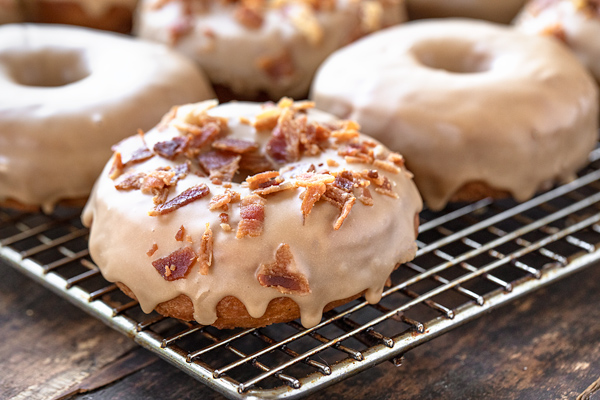 Have I ever told you that one of my favorite activities during the fall season is preparing desserts and sweet treats? I have? Yeah, I'm pretty certain I've mentioned it here once or twice…at least! 😉

All silliness aside, it's true. I really do enjoy getting out my cozy little apron (I do actually have one!), tying it around my waist, and then getting out all of my sweet and fragrant ingredients to whip up some comforting dessert bliss by way of some muffins, bars, breads, cakes...or donuts!

For me, donuts are a little indulgence, and a slightly guilty pleasure.

I don't eat them all that often, truth be told, but every now and then my hubby and I get a strong craving and prefer to go to a slightly more upscale/gourmet donut shop or bakery for a few sweet “fried rings” to quell our craving.

And while of course I thoroughly enjoy those tasty donuts, I must tell you that nothing beats homemade donuts made from scratch.

When whipped up in one's own kitchen, with simple, flavorful ingredients one can actually pronounce, and most likely has at home in their pantry, there's no sweet treat quite like ‘em.

Lately, I've been tinkering in my kitchen (aka my “lab”), having lots of fun developing my recipe for maple donuts, which sounded particularly enticing to me this season.

We have a few gourmet donut shops here in Los Angeles that make some truly uniquely flavored donuts, and I took my queue from them and decided to have it be an option to even add a sprinkle of crispy bacon to this recipe just for fun.

However, these maple donuts are delicious just as they are, no bacon necessary, if you're not a fan of this savory twist! 😉

Prepared with a moist batter specific to cake donuts, with a whisper of nutmeg and cinnamon to create that classic flavor, then quickly fried and dipped in that creamy maple glaze, these are a total treat and wonderful indulgence.

So if you've ever wanted to try your own hand at homemade donuts, then this maple donut recipe is truly something to give a whirl in order to experience your own better-than-a-gourmet-donut-shop donuts! 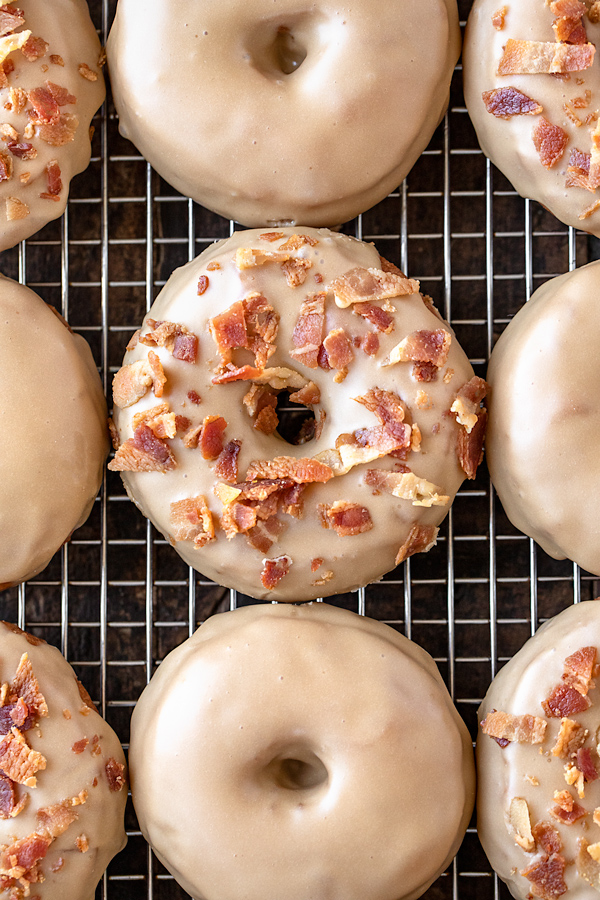 How to Make Homemade Donuts Moist and Cakey

This recipe for homemade cake donuts is leavened using baking powder, which causes the prepared dough to puff in the hot oil when fried, creating steam and cooking the donut from within.

When preparing a cake donut, other ingredients used are flour, spices and/or flavorings, some salt, some sugar, eggs, fats, and a liquid.

In testing this donut recipe, I went through many iterations (!!!) in order to create this one, which had the best cakey texture and flavor, and moist crumb.

A typical fried donut recipe usually calls for milk, but in testing these, I found that adding in a bit more additional fat helped to keep the fried donuts less dense, not dry and heavy (not all that appealing, right?). I wanted these donuts to be lighter, more tender and rich.

For this I turned to half & half instead of milk, and used an extra tablespoon of melted butter in the donut batter as well.

The other key to preparing donuts that are nice and soft, and that taste as close to a donut shop's as possible, is to not overwork the batter/dough itself.

When researching, I noticed that many recipes called for using a stand mixer to mix together the ingredients, but the concern here is that one can very easily over-mix the batter creating tough donuts.

So rather than pulling out the stand mixer, I opted to use a couple of bowls, my hand-held mixer (only briefly), a whisk, and a wooden spoon to do the job.

I won't sugar coat it for you (pun intended), donuts are not necessarily the easiest thing to prepare.

They definitely benefit from some extra patience and lots of love infused into the process, because the dough is quite sticky and soft to work with; but I promise you, it can be done!

And, in my humble opinion, it is so worth the effort.

Here's a glance at how I make my maple donuts: (or just jump to the full recipe...) 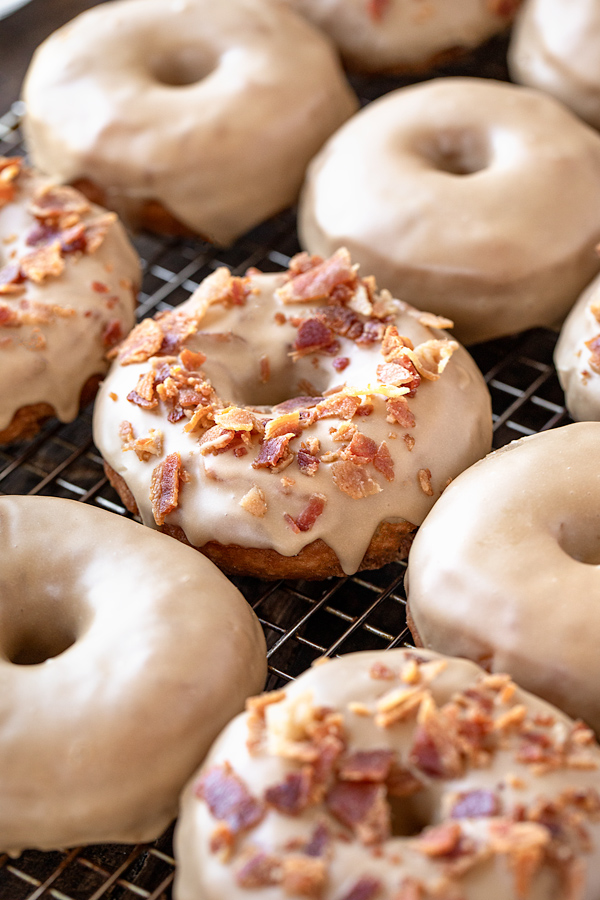 These maple donuts rival the best gourmet donut shop’s version, and come with an optional topping of crispy bacon! 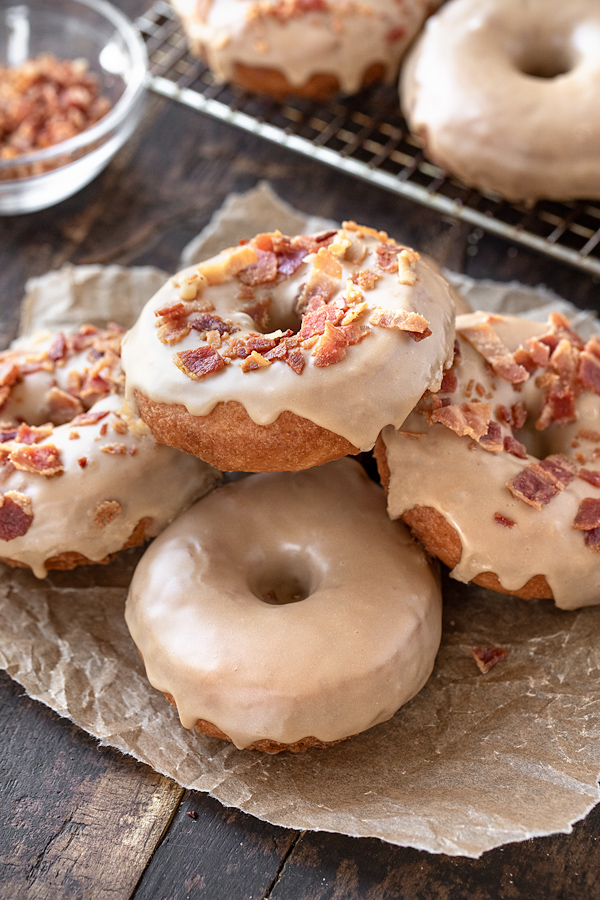 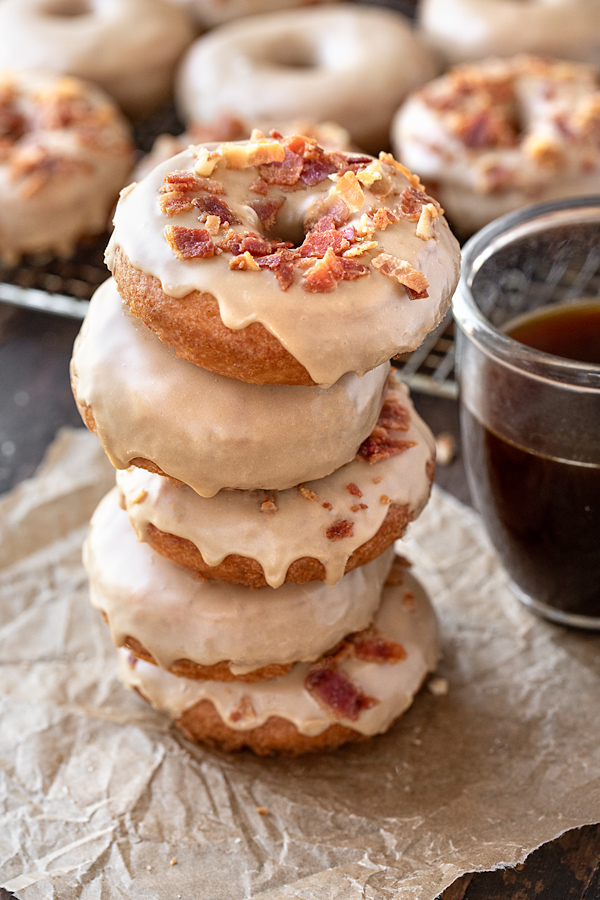 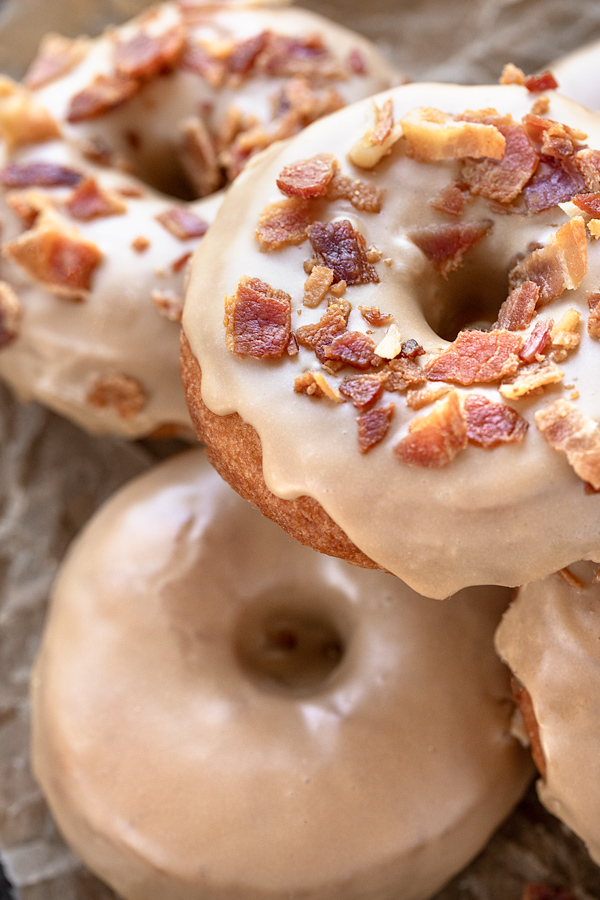