Little is more comforting than a hot, hearty bowl of beef barley soup filled with lots of fresh vegetables—you can taste the love in every spoonful! 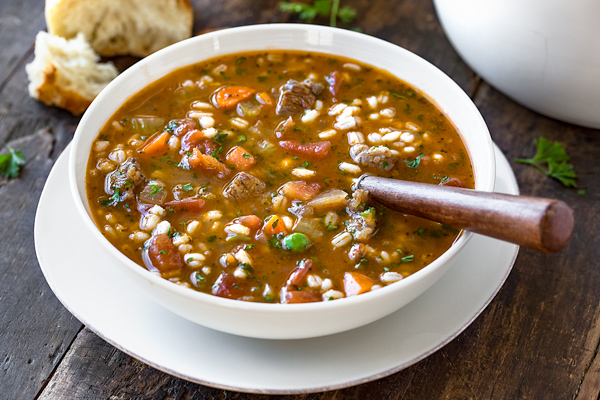 Beef Barley Soup, a Deliciously Comforting Soup You Can Make a Meal Out Of

Years and years ago, back when I was just a wee kid, there were a series of commercials for a brand of soup that claimed one could eat their soup with both a spoon and a fork.

The slogan they used was, “The soup that eats like a meal”, and boy did they make their soups look appealing to a young kid's eyes!

And they used to show a spot for a beef barley soup, one filled with loads of bright, vibrant vegetables and big pieces of beef ladled into bowls; and because I've always been a big fan of beef barley soup, it looked so appealing to me!

I implored my mom to buy a can for me the next time she went to the store. I just had to have a big bowl of this beef barley soup to try for myself.

And my mom being a sweetheart, she obliged (never mind that she was an expert at preparing her own homemade beef soup) so that her silly daughter could try this canned version.

I could hardly wait to try that soup that eats like a meal...

So I got out my can opener, carefully removed the tin lid, got out a small sauce pan, and dumped the contents into the pan.

Upon examining the soup, I noticed how highly glossy it was, which was sort of strange. Mom's was never glossy like this...but OK. I figured it would still probably taste great!

So I heated it up, then carefully ladled it into my little bowl, and enthusiastically took a big bite, and boy...

I was not impressed!

To my budding little palate, this beef barley soup had the strangest consistency and flavor, with that mouth-coating slickness at the forefront, and the "meat" being a little odd in texture too.

And the vegetables? Well... Let me just say that they didn't exactly taste like the commercial...

Sadly, it was not what I had expected—it even looked completely different as it slid out of the can!

This became one of my early experiences tasting the difference between processed food and homemade food, which was prepared with real ingredients and of course, love.

But this experience actually did me a favor, because it helped me to develop a deeper taste and appreciation for homemade food.

It also planted a little desire in me to one day develop my own recipe for what I think a truly hearty, rich, aromatic, and delicious beef barley soup should be, one definitely worthy of making a meal out of! 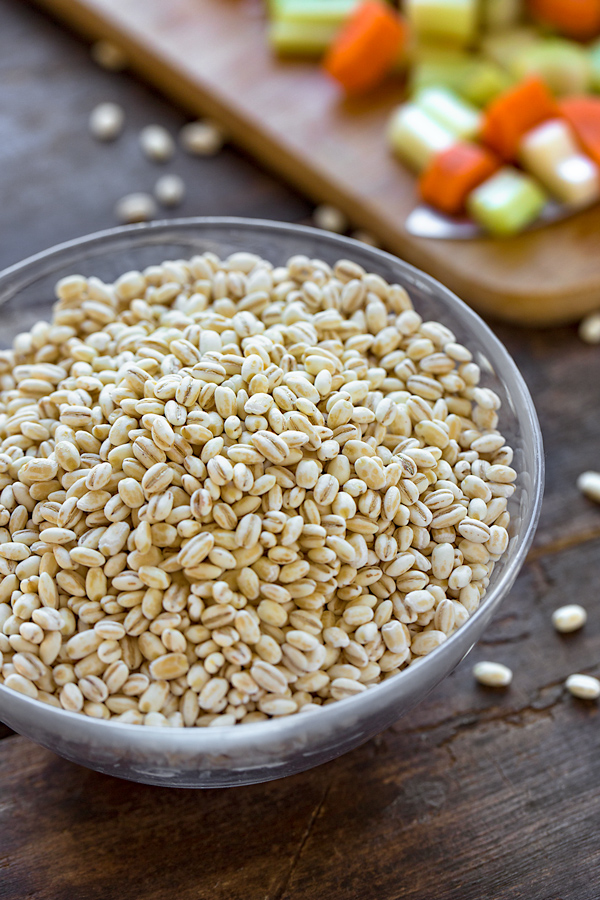 How to Make Beef Barley Soup

The kind of beef you choose to use for beef barley soup is up to you.

One really great option that isn't very expensive is beef stew meat; but that cut of beef takes longer to cook, typically about 2 hours of simmering for a nice, tender result.

I personally have often prepared my beef barley soup with stew meat when that's what I have on hand.

But if I'm looking for a bit more “beefy” flavor, more richness and more tenderness, then I opt to go a slightly more pricey route and use rib eye steak.

Rib eye has an amazingly beefy flavor; and because it is meant to be cooked quickly rather than for an extended period, the chunks of steak only require a quick sear/browning before being removed from the pot, only to be added back in at the end to finish in the hot broth.

I use rib eye in this delicious Steak and Ale Soup recipe, and it makes for a richer end result because of its marbling of fat—lots of great flavor in that!

And for the sake of my recipe here, I'm using the rib eye steak, because again, I love the flavor of it. And because this is one of my personal favorite soups, I'm willing to splurge for it.

Here's how I prepare my beef barley soup:

(The full recipe is below) 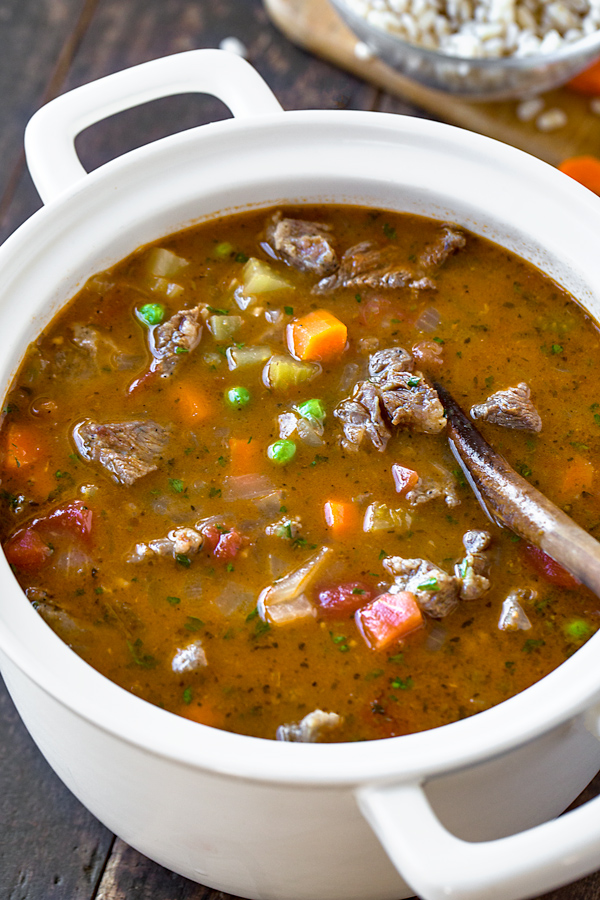 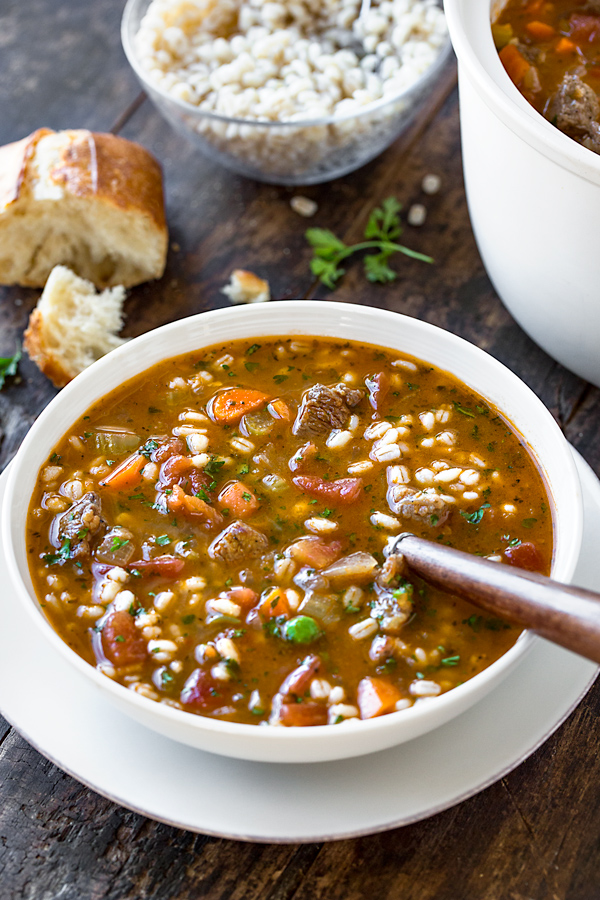 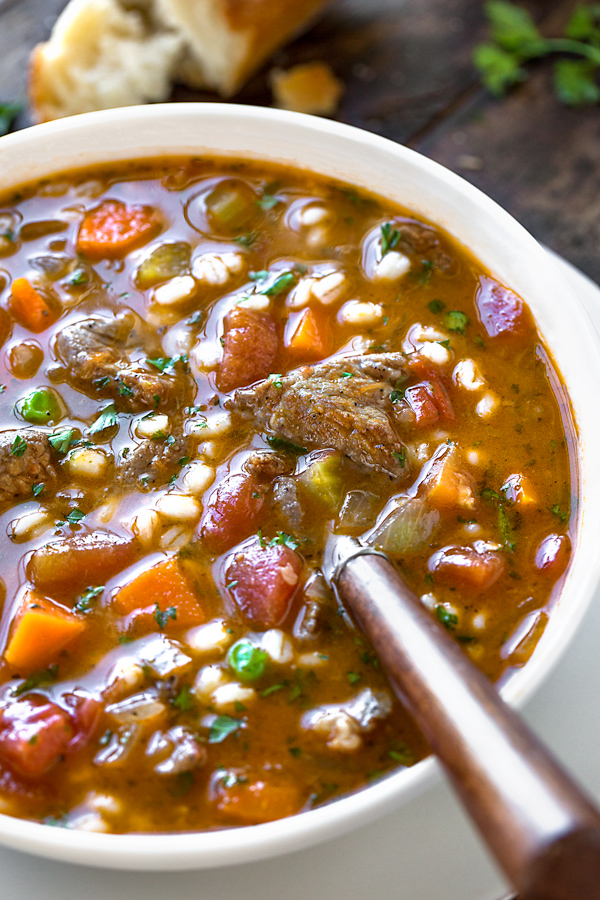 This comforting beef barley soup, filled with lots of vegetables, is the perfect meal—it's deliciously cozy and hearty!

-Begin by preparing your barley according to package instructions; set aside once cooked.

-While the barley cooks, prepare the soup: place the cubed rib eye into a medium bowl, and sprinkle with a couple of good pinches of salt and pepper; sprinkle over 2 tablespoons of the flour, and toss to coat.

-Place a medium-large soup pot over high heat, and add in the butter and the olive oil; once melted and hot, add in beef cubes (work in two batches as to not overcrowd the pot) and allow it to sear on all sides until a golden crust forms, about 1-2 minutes; remove from pot and set aside. (Beef should be rare inside.)

-To the same pot, add in the diced onion, carrots and celery, and stir to saute for 2-3 minutes, scraping up the brown bits on the bottom of pan for flavor; add in the Italian seasoning and the garlic, and stir until aromatic.

-Add in the tomato paste and stir to combine, followed by the remaining 2 tablespoons of flour, stirring that in as well.

-Add the beef broth, whisking all the while to keep the soup smooth, then add in the diced tomatoes.

-Bring the soup to a vigorous simmer, then cover and reduce the heat and allow the soup to simmer gently for 15 minutes, or until the veggies are tender.

-Turn off the heat, and add back into the pot the seared beef along with any juices, plus the peas and the parsley; allow the soup to sit for about 5 minutes to allow the beef to gently heat through and finish cooking to medium-rare.

Hungry for more soup recipes? Check out this Harvest Stew with Smoked Sausage, this Hearty Italian Chicken and Autumn Veggie Soup, and this White Bean Soup with Spicy Chorizo!

« Orecchiette with Pork Ragu
From the Heart: The Gift of “Getting To” »