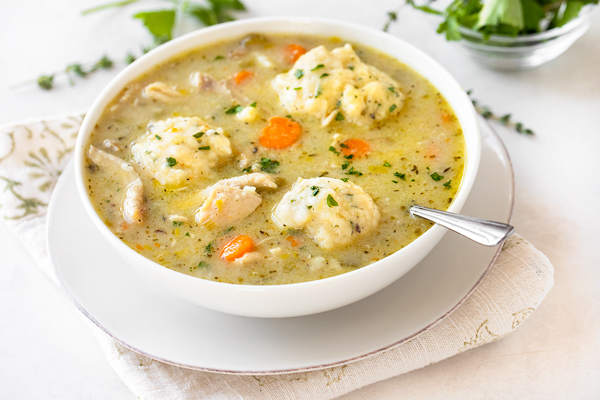 I was introduced to chicken and dumplings through my hubby, Michael, early on in our marriage.

Believe it or not, I'd never had this classic American dish (I grew up on Eastern European food).

But I eventually learned to prepare my own version of chicken and dumplings through tips my husband shared with me about how his great grandmother prepared hers, and a little trial and error as well!

My original version of chicken and dumplings would take me hours to prepare, beginning with my family recipe for chicken broth (which needed 4 to 5 hours of simmering for full flavor), to then mixing together, rolling, and finally cutting out my dumpling “strips” to add to the hot broth.

While the result was delicious, making the dumplings was pretty much an endeavor that took up the entire afternoon!

Enter my chicken and dumpling soup, a rich and hearty, yet slightly more brothy version of the classic, made with easy herb dumplings.

My Recipe For Chicken and Dumpling Soup

Friends, I'll just start out by admitting that I'm kind of addicted to this soup…

I love everything about it, from how quick the soup base is to put together (about 25 to 30 minutes, instead of 4 to 5 hours), to the preparation of the herb dumplings, which is such a breeze now.

I honestly wasn't sure that the soup base, or broth, would have a strong enough chicken flavor using this quicker method, but it totally did.

The secret is using good vegetables that offer earthiness and aroma, plus rich and flavorful chicken thighs with their skin on and bone in, and organic is best not only for health reasons, but for flavor.

For my chicken and dumpling soup recipe, I use sliced carrots and diced celery, like the traditional version does.

But instead of onion, I substitute two small leeks, and chop them finely. I also use a parsnip, which adds sweet and earthy flavor to the soup.

To keep the dumplings extra light, pillowy and flavorful, I use that self-rising flour, add in some whole milk and some melted ghee (you can use butter if you prefer), as well as some finely chopped parsley—I love the addition of herbs in my dumplings!

After these dumplings are dropped into the simmering soup and allowed to cook, the result is light, airy dumplings that melt in the mouth.

Here's a sneak peek at how I make my chicken and dumpling soup recipe: (or just jump to the full recipe...)

This rich chicken and dumpling soup is made with easy, pillowy herb dumplings, juicy chicken, and colorful, earthy veggies!

Tips & Tidbits for my Chicken and Dumpling Soup recipe:

Craving more cozy recipes to warm your belly? Check out this Chicken Pot Pie with Biscuits, this Beef Pot Pie, this Chicken Paprikash, these Savory Hand Pies, this Chicken Stew, or this Hearty Italian Chicken and Autumn Veggie Soup!