If you’ve ever wondered how to make chicken broth from scratch, the good news is that it’s quite simple! All you need is a handful of quality ingredients and some time, and you’re on your way to a rich and delicious homemade broth to use in all your favorite recipes. 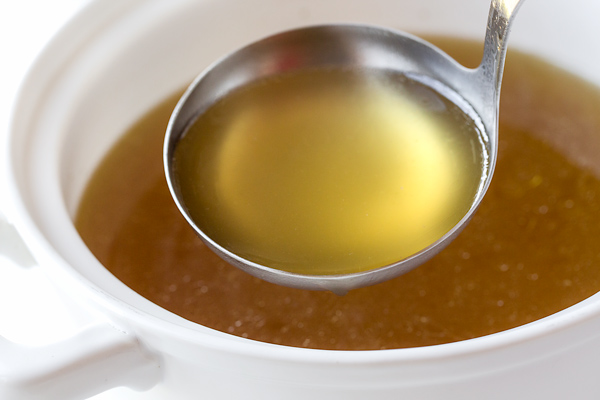 Growing up in an Eastern European household, I ate a lot of chicken soup.

Both of my parents knew how to cook, but it was typically my momma that made our meals. And with our meals there was usually always some kind of soup as a starter to the meal, often homemade chicken soup.

She would use one of our extra large pots for this preparation, because she would place a whole chicken into that pot, along with lots of colorful vegetables (whatever we had on hand—it was a good way to clean out the fridge) and an array of aromatics such as onions and herbs.

Then she would cover all of those ingredients with water, and allow that to simmer for hours and hours. It bubbled gently on the back of the stove with the lid slightly askew, until it became deeply golden and rich with chicken flavor, filling the entire house with amazing aroma.

Each of us had our own way of enjoying a bowl of that delicious chicken soup. My dad would fill his bowl with the thin noodles we used, along with the over-cooked vegetables from the pot (waste not, want not), and the chicken saved from the bones to create a more hearty and filling meal. But I preferred to fill my belly with only the noodles and the savory and soothing golden liquid which offered me such warmth and comfort.

Ultimately it was a rich and delicious chicken broth that was at the center of it all, only slightly embellished with some noodles, veggies and chicken. And it's that kind of broth that makes a perfect base for many other soups and recipes.

So here’s everything you’ll ever need to know about how to make chicken broth, from scratch!

What Goes Into a Basic Chicken Broth Recipe?

Typically, when it comes to chicken stock, the carcass or bones from a chicken are used in the preparation of it. But because I like to use a whole chicken for stronger flavor—meat, skin, bones and all, I'm actually preparing a chicken broth with an incredible richness and depth to it.

Vegetables are essential to creating a broth and I opt to use a ratio of four medium-size carrots, three ribs of celery, one large onion, and four small cloves of garlic in my homemade chicken broth. Other veggies that can be included are kohlrabi (my mom used this in hers often times), parsnip, or even turnip—but know that the latter two may add a slight hint of sweetness.

I also tie together a generous bundle of whatever kind of herbs I have on hand—typically flat-leaf parsley and thyme—with a bit of kitchen string, which helps make removal easier later on.

And then a small palm-full of black pepper corns and a good dash of either Himalayan pink or sea salt are tossed in to create some savory-ness.

All that's left is to fill the pot with cold water, roughly enough to cover the chicken by a couple of inches, so that the flavor remains nice and strong. 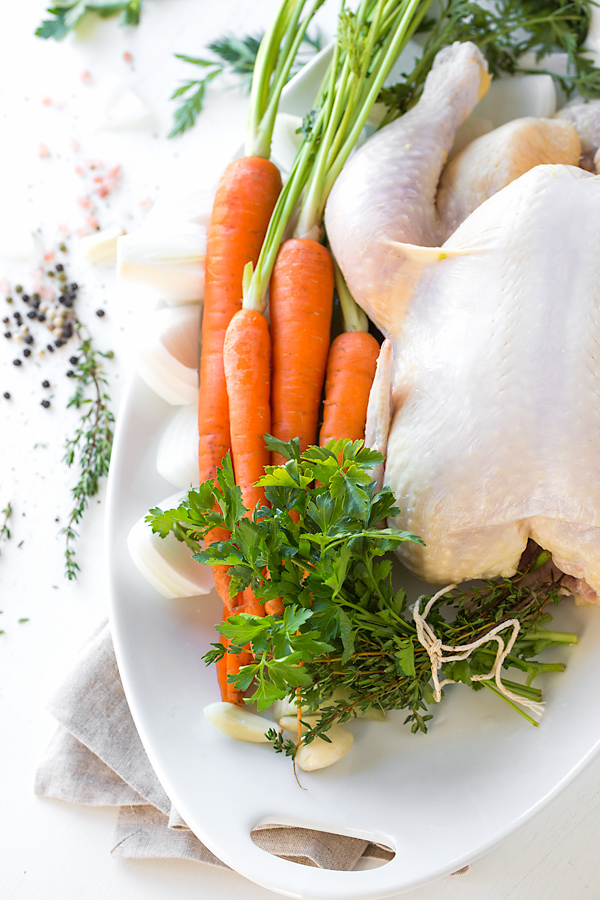 How to Make Chicken Broth

And now, you have a delicious homemade chicken broth that I'm sure you will find truly delicious when you're making all your favorite soup recipes. Hope you enjoy!

Homemade Chicken Broth is a classic kitchen staple sure to take your homemade soups, sauces and all kinds of recipes to the next level! 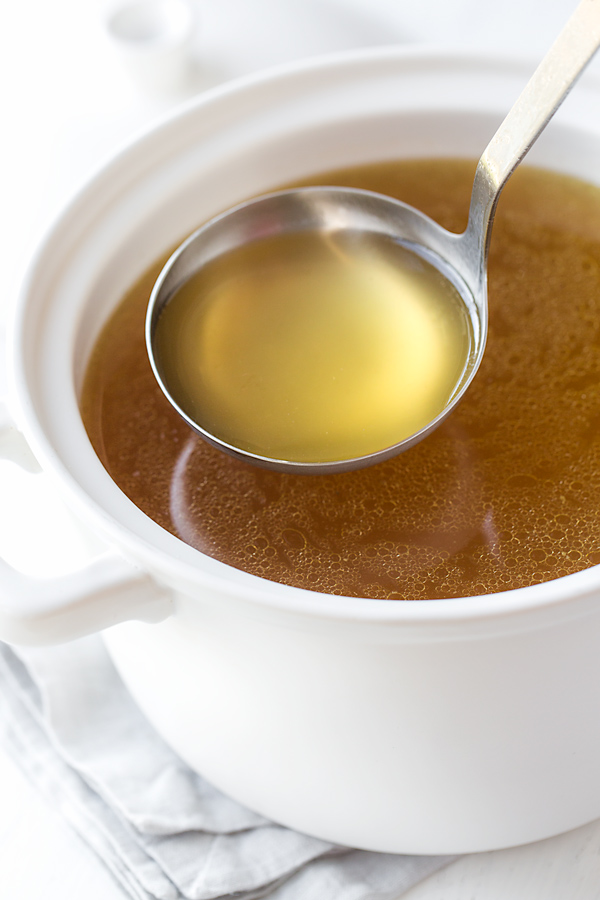 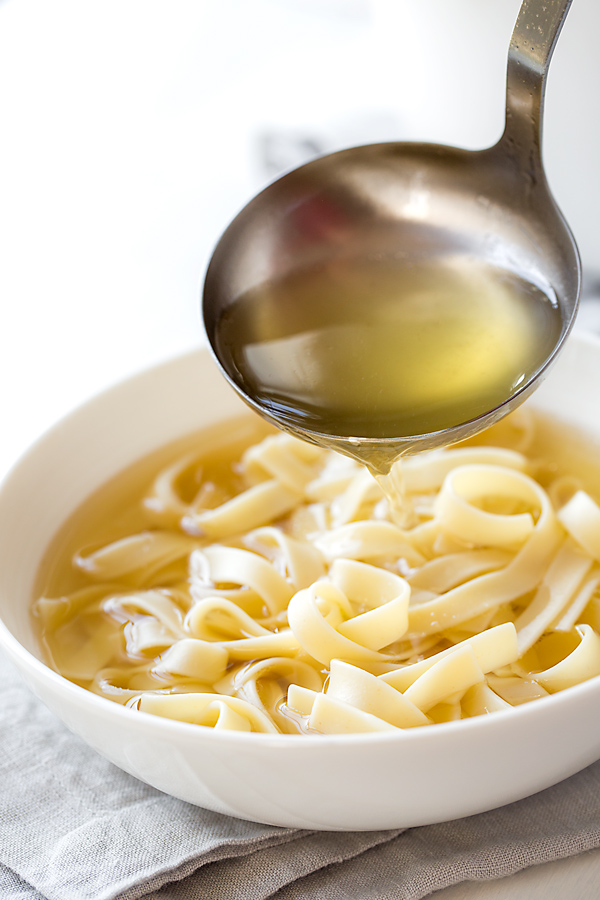 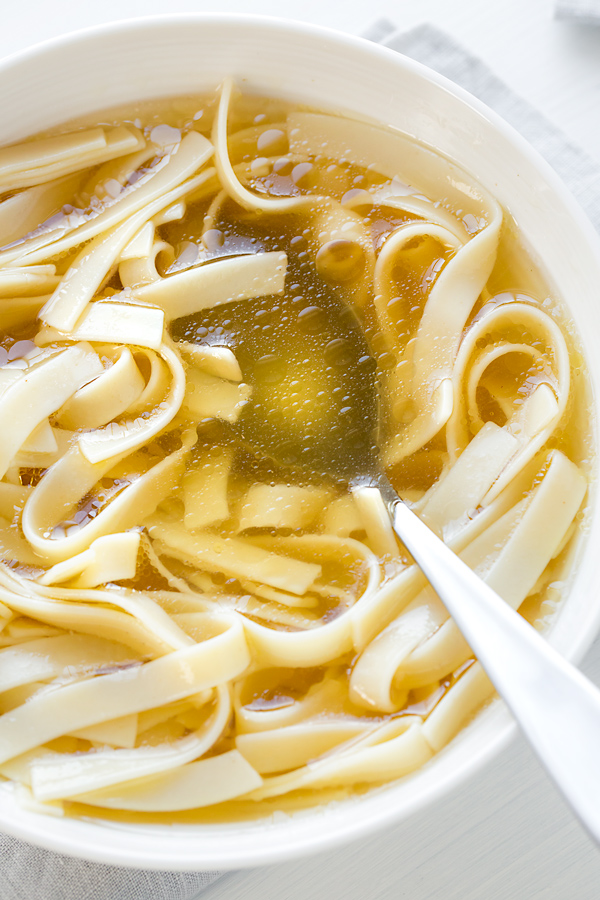