Deliciously rich and velvety, my chicken penne pasta is an easy, one-pan chicken recipe that's an ultra comforting pick for a mid-week dinner. Filled with tender chunks of chicken breast, penne pasta, asparagus, mushrooms and sun-dried tomatoes bathed in a creamy sauce kissed with Dijon, this chicken penne pasta recipe is sure to be a cozy favorite! 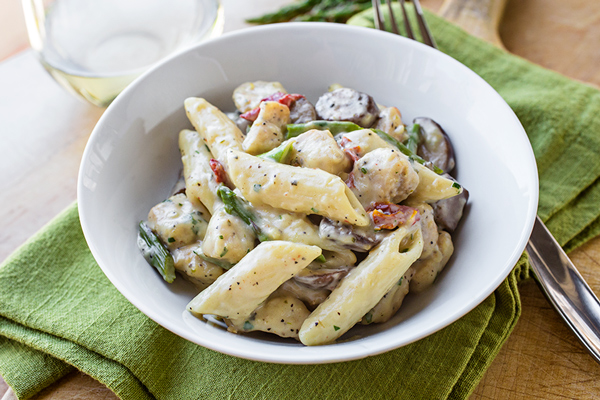 A Chicken Pasta Recipe Filled with Lots of Tasty Ingredients

Penne pasta, combined with a handful of other bright ingredients, is terrific for those occasions when we're longing for comfort, but when I prefer not to spend too much time at the stove cooking something too elaborate after a long day.

Enter this chicken penne pasta recipe, filled with lots of earthy ingredients all tossed together with a rich and creamy sauce!

It's wonderfully satisfying yet also light, and the bonus? It's cooked up and ready to enjoy in around thirty minutes!

My Recipe for Chicken Penne Pasta

I love how this chicken penne pasta comes together with a handful of pantry staples plus a few other tasty morsels that I usually have on hand...

Because I often have a package of skinless, boneless chicken breasts in the fridge or freezer, I use those for this dish by simply cutting them up into bite-size pieces and coating them with a bit of flour and some seasoning to create a bit of a flavorful crust.

Since I also like to add some veggies for texture, flavor, and a pop of color, I add into the mix some earthy mushrooms, a couple of handfuls of thin asparagus spears cut into smaller pieces, plus a small sprinkle of sun-dried tomatoes.

The wonderful thing about this chicken penne pasta is that you can substitute other ingredients that you happen to have on hand instead, opting for something like peas, spinach, broccoli, etc., in place of the asparagus, mushrooms and sun-dried tomatoes.

You can have lots of fun making this dish your own!

And the sauce is simple to prep and works really well with any ingredients you prefer to use, with a bright creaminess to it that makes each bite utterly irresistible.

Here's a sneak peek at my chicken penne pasta recipe: (or just jump to the full recipe...)

This chicken penne pasta is brimming with crisp asparagus, earthy mushrooms and sun-dried tomatoes all in a rich, creamy sauce!

Cook's Note: This recipe was originally published in 2015, and has been updated with even more love!