Cream of mushroom soup is delectably rich and velvety, and my cozy homemade version features both shiitake and crimini mushrooms, plus a hint of sherry, cream, and fresh thyme! 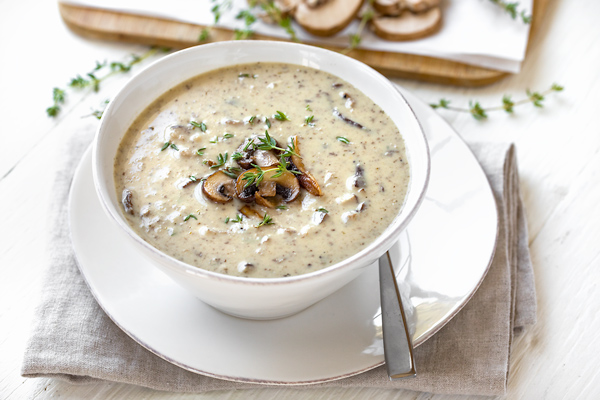 Cream of Mushroom Soup, Best Made From Scratch

Being a mushroom lover, one of the tastiest things I like to prepare is a comforting bowl of rich and savory cream of mushroom soup.

And nothing compares to homemade cream of mushroom soup, of course, because not only is it prepared with fresh, natural ingredients, but also with lots of love and nurture which makes each spoonful taste extra special and luxurious. You definitely can't get all that out of a can! 😉

My cream of mushroom soup recipe has generous amounts of both shiitake and crimini mushrooms to create that deep flavor and delicious texture. I also add a hint of sherry, some chicken broth, thyme, and the rich finishing touch of cream.

Ladled up then served with a bit of warm bread on the side or parmesan crisps, it's one of the tastiest and most comforting cream soups one can make from scratch! 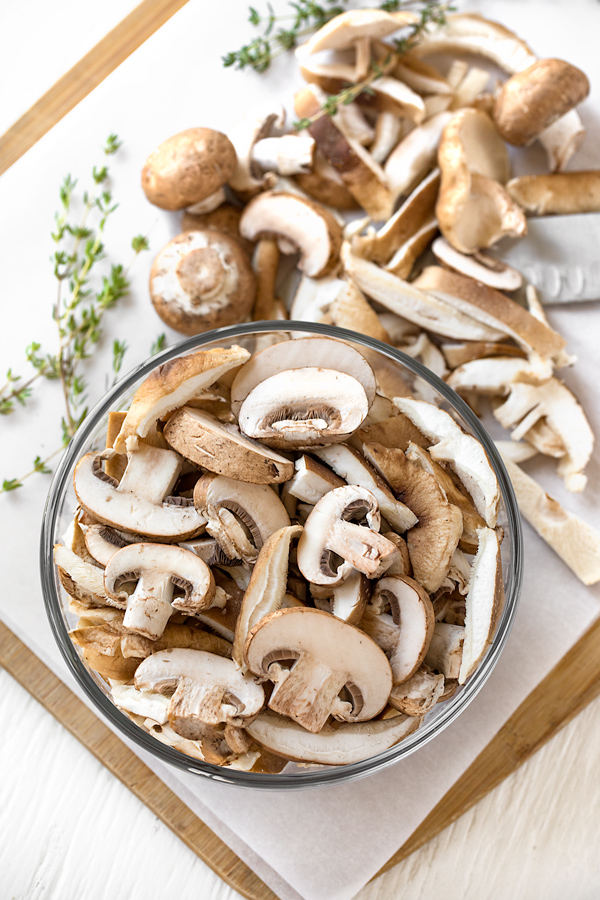 How to Make Cream of Mushroom Soup

There are several options when it comes to preparing cream of mushroom soup from scratch, as far as the texture of it is concerned.

One option is to puree the entire soup once simmered, creating a completely smooth soup with no slices of mushrooms remaining.

The second option is to not puree the soup at all, leaving all of the sauteed mushroom slices whole, for lots of bite.

The third way, and my personal preferred method, is to incorporate both of the above methods. I like to puree a portion of the sliced, sauteed mushrooms into my soup while reserving the rest of them to add into after pureeing it.

What I like about this method is that there's a smooth, velvety quality to the soup yet also a bit of texture that both the pureed mushrooms and the sauteed mushroom slices offer.

Here's a glance at how I prep my cream of mushroom soup recipe: (or just jump to the full recipe below...) 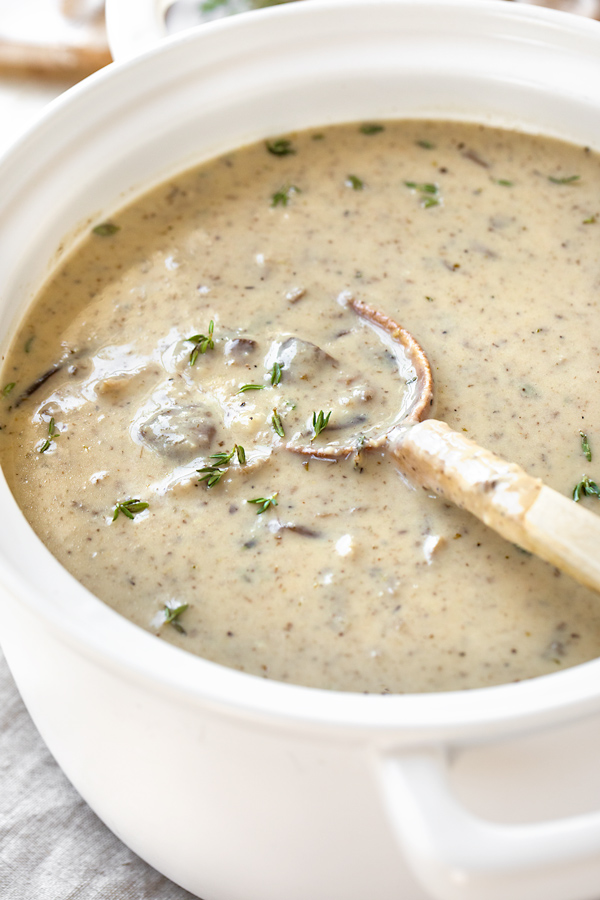 This cream of mushroom soup is a cozy classic prepared from scratch with fresh shiitake and crimini mushrooms, a hint of sherry, plus cream and fresh thyme!

- Place a large soup pot or Dutch oven over high heat; drizzle in about 3 tablespoons of the olive oil, and once hot, add in about ⅔ of the sliced mushrooms, reserving ⅓ of them for a moment.

- Add in a small sprinkle of salt and black pepper, and saute the mushrooms for about 8-10 minutes, until their liquid evaporates and they are browned; remove these mushrooms from the pot, and reserve them until the end.

- To this same pot add another 2 tablespoons of olive plus the butter, and once melted, add in the diced onion and the remaining ⅓ of raw sliced mushrooms, and saute for about 6-8 minutes until softened and browned, and the liquid has mostly evaporated.

- Add in the garlic, 1 teaspoon of the fresh thyme leaves, the Italian seasoning and the white pepper, and stir to combine; add in the sherry, and allow it to simmer and reduce for about 2 minutes until almost completely gone.

- Stir in the flour and cook together for about 30 seconds to cook out the raw flour taste, then pour in the chicken stock/broth, whisking all the while to avoid lumps from forming.

- Allow the soup to come a simmer, then simmer for 10 minutes until thickened.

- Off the heat, puree the soup (I use a hand-held immersion blender, but you can also use a regular blender and work in batches) until smooth; stir in the heavy cream, add back into the pot the reserved sauteed mushrooms from earlier, plus another 1 teaspoon of the fresh thyme leaves, and the soy sauce.

- Ladle into bowls, sprinkle over some of the remaining thyme leaves, and serve with some parmesan crisps or bread. (If I have some leftover mushrooms, I like to slice those up and quickly saute them, then spoon them on top of the soup as a garnish—totally optional.)

Tips & Tidbits for my Cream of Mushroom Soup: 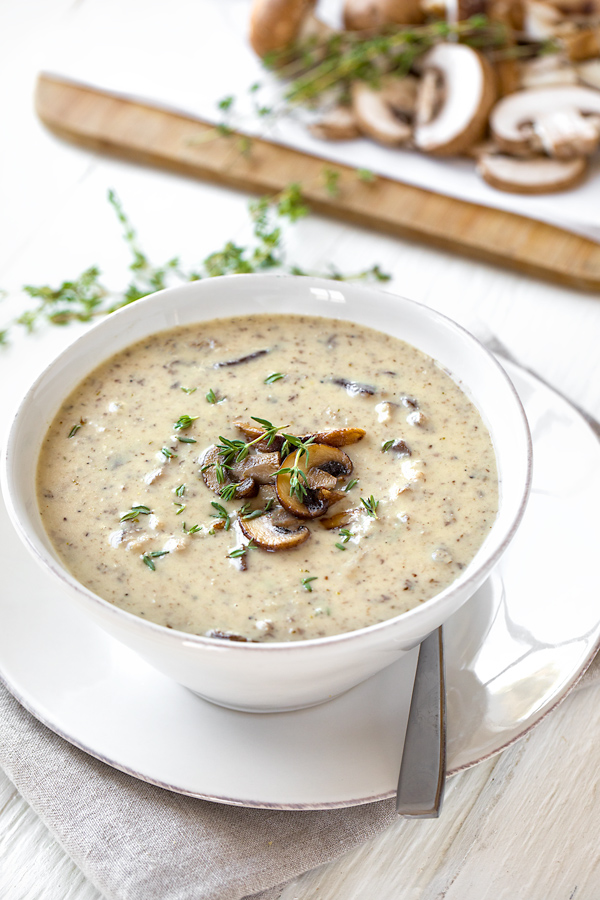 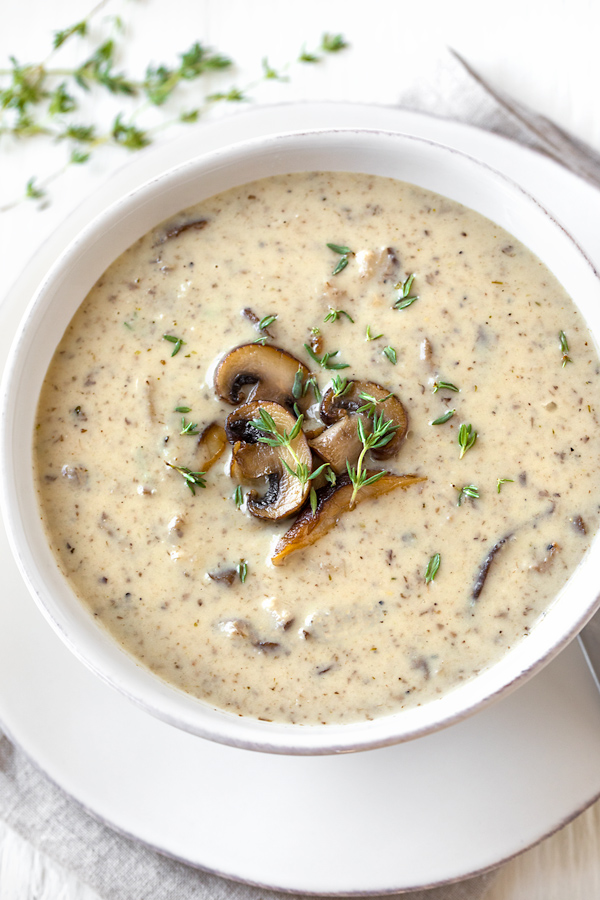 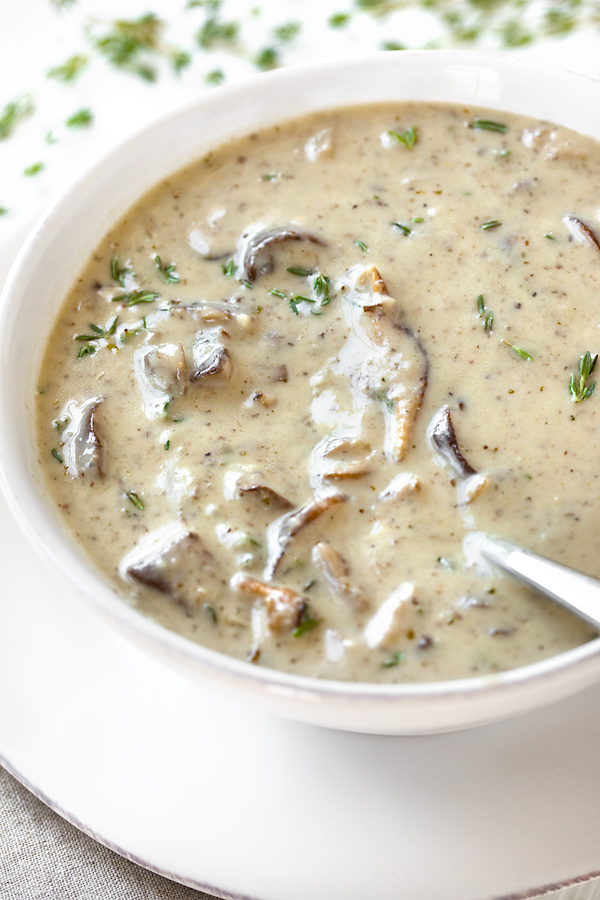 Hungry for more cozy soups? Check out this Chicken Chowder, this Corn Chowder, and this Steak and Mushroom Soup!