Golden and crisp, crostini make for a stunning appetizer to pass around when topped with a few mouthwatering and colorful ingredients. My crostini recipe features tender and juicy slices of marinated grilled flank steak, grilled cherry tomatoes, plus an avocado-lime salsa for bright, south-of-the-border flair! 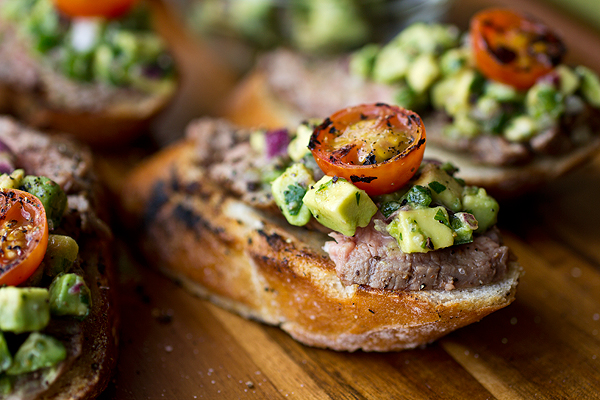 An Appetizer with Deliciously Endless Possibilities

When my hubs and I are in the mood to kick back and relax with a couple of cocktails or a nice glass of wine at the end of our week, and I'd like to serve us something unique and delicious to nibble on as an accompaniment, crostini often make an appearance.

Crostini, which translates to “little crusts” in Italian, are toasted or grilled slices of rustic bread that serve as golden, crunchy vessels to spoon fresh, vibrant toppings over and enjoy in just a few bites.

We love a good crostini appetizer, because the options are absolutely endless when it comes to what to spoon over top...

Some favorite toppings are diced tomatoes, basil and olive oil, or perhaps even some garlicky sauteed mushrooms.

When I prepare a cheese ball or my delectable whipped goat cheese spread, I often like to serve crostini on the side of that as well, to offer a crunchy base to the rich, flavorful cheese.

But one of our all-time favorite crostini recipes to enjoy is this crostini with grilled steak, prepared with lime and spice marinated slices of grilled flank steak, grilled cherry tomatoes for sweet-tangy flavor, plus an absolutely out-of-this-world avocado-lime salsa for the bright pop of color and zesty flavor.

How To Make Crostini with Grilled Steak and Avocado-Lime Salsa

When it comes to choosing the best kind of bread to use to prepare crostini, the more rustic the better.

Typically, I like to use a classic French baguette and slice that on the bias so that the crostini have slightly pointed ends for shape. A French baguette creates the smaller crostini for an appetizer that is just a few bites, which is ideal.

One can also use a crusty ciabatta loaf or country loaf. And if it's a wider type of loaf, it can be cut in half length-wise and then sliced across to create crostini.

As long as the bread is crusty and rustic, the texture of crostini will be light and crisp, which makes it a perfect vehicle for your favorite topping.

For my recipe here, I'm opting for a French baguette which I slice into twelve pieces, then very lightly brush each with olive oil, and toast directly over the flame on my gas burner until charred or golden brown.

If you prefer, you can certainly toast your crostini on a baking sheet in the oven (after brushing the slices with oil) until golden and toasted.

For added flavor, I rub a garlic clove over each crostini before adding my toppings—so divine!

Here's a sneak peek at how I make my crostini with grilled steak: (or just jump to the full recipe...)

This crostini appetizer with grilled flank steak, cherry tomatoes and avocado-lime salsa is delectable to pass around for a special gathering!

Tips & Tidbits for my Crostini with Grilled Steak recipe:

Hungry for more delectable appetizers? Check out my Whipped Goat Cheese, these Garlic Mushroom Toasts, these Braised Short Ribs on Garlic Crostini, or this Artichoke Dip!

Cook's Note: This recipe was originally published in 2013, and has been updated with even more love!