French onion soup is a scrumptious classic with its savory broth and delectable cheese melted over top. It holds within it lots of soothing comfort and love in each spoonful! 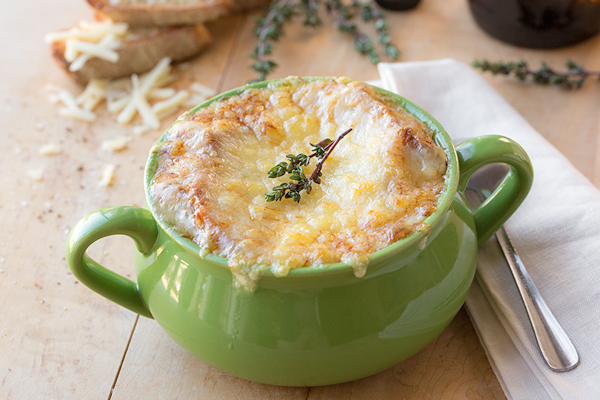 Ever since I was a child, I have always loved the savory-sweet flavor of French onion soup. Anytime it was offered on a menu at a restaurant we would go to for dinner, I would ask my parents if I could order it as an appetizer before my meal.

The glorious elixir would always arrive at the table in a small, crock-like bowl, and I would cautiously proceed because I could tell that it had just been pulled out from under the broiler, as the delicious gruyere cheese was always perfectly melted over that little piece of toast just beneath it.

Ah, how that scrumptious soup beckoned for me to plunge my spoon into it!

That first bite was always so exciting! I’d have to break through that wonderfully cheesy layer and through the tender toast in order to get all the way to the bottom of the bowl to spoon up the caramelized onions that gave the soup its rich flavor.

It was at once beefy, slightly sweet from the onions and the sherry, and totally soothing and delectable.

What a treat it was indeed, and to this day, French onion soup is still one of my ultimate favorites! 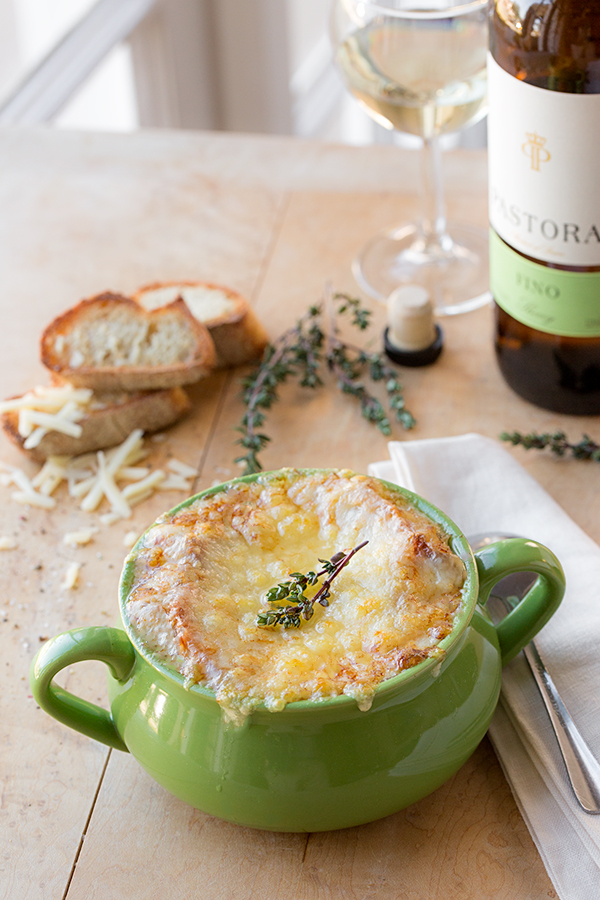 For me, homemade French onion soup represents love and care in a bowl—it's a true comfort to my soul.

It can take the chill out of the bones, and create an aroma in the kitchen that invites and says, “There's something exquisite that's been simmering away on the stove... won't you partake?”

It's filled with lots of onions, caramelized in a combination of butter and olive oil, with a touch of thyme and a bay leaf or two for aroma, a bit of sherry for depth, and some savory beef stock or broth to gently simmer everything in.

Each of the ingredients deliciously mingle during the cooking process to create that glorious flavor that any French onion soup lover finds themselves craving!

How to Make French Onion Soup

French onion soup is a wonderfully uncomplicated one-pot meal, its depth and layers of flavors making for an experience that fulfills and sustains.

The process of preparing it is about layering the ingredients, giving each their due time; and when one does that, it can definitely be tasted.

The onions need sufficient time to caramelize and become almost “jammy”, slightly sweet and savory (about 40 minutes or so on lower heat does the trick).

Once the other ingredients are added in stages, then the soup is simmered for about 40-45 minutes to meld and become scrumptious!

Here's my French onion soup recipe at a glance: 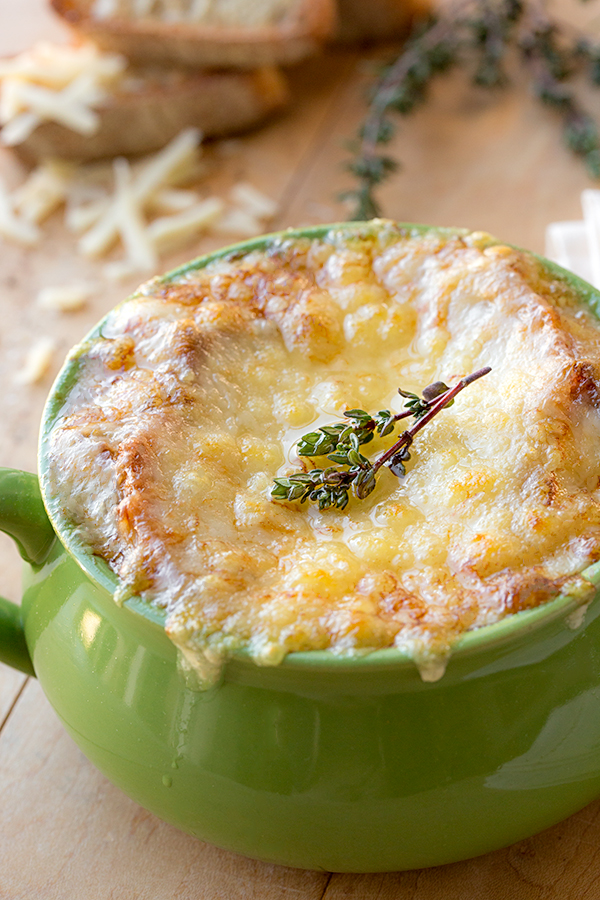 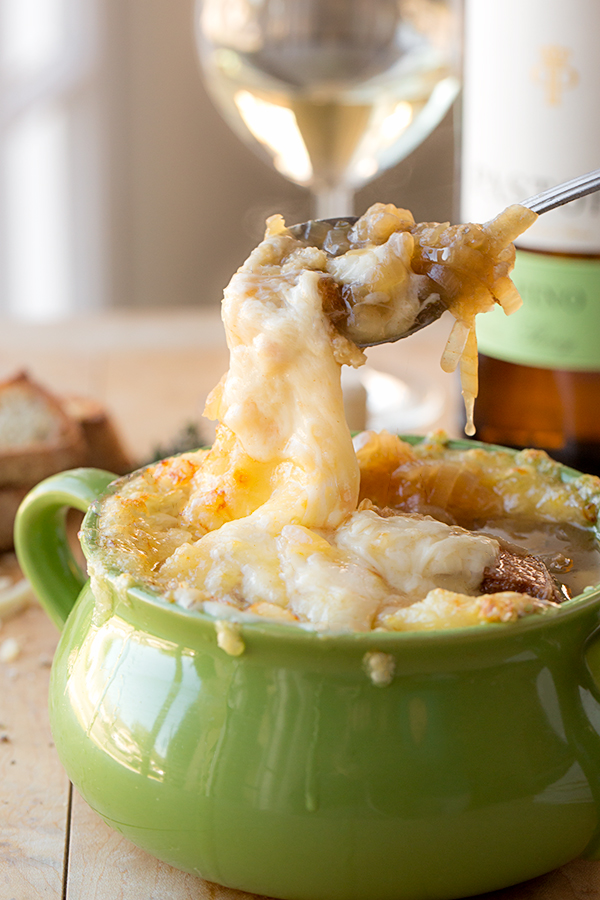 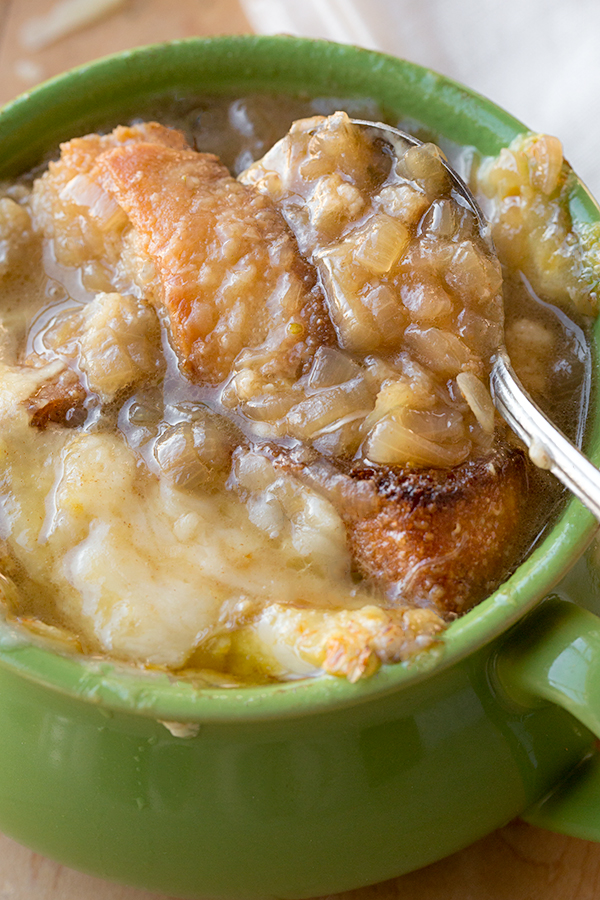 This rich French onion soup is a classic recipe that comforts and soothes with its mildly sweet yet savory flavor and its gloriously cheesy lid!

-Place a very large pot over medium-high heat, and add in the butter and the oil; once melted together, add in the sliced onions (there will be a lot, but keep in mind they will cook way down) and stir to get them situated in the pot.

-Cook them, stirring every few moments, until they begin to soften and wilt down, about 15 minutes.

-After the 15 minutes, add in the sugar, a couple of good pinches of salt, plus a hefty pinch of black pepper, and stir to combine; continue to cook the onions until they caramelize and become a deep, golden-brown, and have an almost “jam” like in consistency, about another 20-25 minutes.

-Once the onions are caramelized and softened, add in the garlic, the thyme, the bay leaves, and the sherry, and stir; simmer for about 5 minutes, stirring occasionally, until slightly reduced.

-Add in the warm beef stock (or broth) and bring to a rolling boil, then reduce the heat to low or medium-low, and simmer the soup, uncovered, for about 40-45 minutes to marry the flavors and to slightly reduce it.

-Fish out and discard the bay leaves.

-To serve, ladle soup into oven/broiler-proof bowls or little crocks, then top with a couple of pieces of toasted baguette, and about ½ cup of the shredded gruyere cheese, and place on a baking sheet under the broiler to melt and caramelize the cheese; garnish with a few thyme leaves, if desired.

Looking for more tasty soup recipes? Check out this Chorizo Soup, this Beef Barley Soup, this Rigatoni Meatball Soup, or this Lentil Soup!

Cook’s Note: This recipe was originally published in 2016, and has been updated with even more love!

« From the Heart: Choosing a Better Way
Baked Mac and Cheese »