Have a hankering for fluffy, delicious French toast made easy? My sweet brioche French toast casserole with cinnamon crunch topping is golden and caramelized on the outside yet pillowy and creamy on the inside—it's everything we crave in traditional French toast, baked up in a sweet casserole! 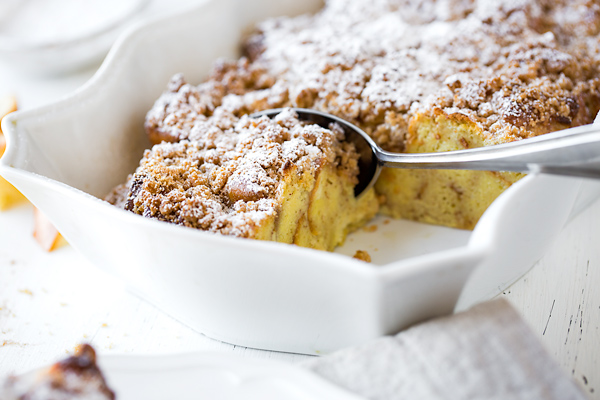 It was a few weekends back when my intense craving for French toast struck...

I wanted French toast for dinner—something that the hubs and I sometimes like to enjoy when we're in the mood for comfort food that leans in the direction of sweet and “breakfasty”, and by that point, I'd been craving that golden, pillowy indulgence for days...

But here was the problem: I didn't want to go out, and, I was feeling a bit lazy.

The last thing I wanted to do was to stand at the stove dippin' and flippin' pieces of bread, frying them up in a pan one at a time.

That process was simply too involved for my liking on that particular late afternoon, so I had to come up with a more simplified alternative to get my French toast fix.

Enter this brioche French toast casserole where everything gets combined and spooned into a big baking dish, with no dippin' and flippin' required!

It couldn't be easier to make a hot, fresh, delicious French toast casserole when you're hungry for this favorite breakfast staple, but aren't craving the somewhat involved process of preparing it.

Soft, rich, brioche bread is ideal for French toast casserole (or even the traditional preparation of French toast), and I love being able to simply cube up it up, whisk together the custard to create that creamy texture, and pour that over the brioche bread.

Before baking, I sprinkle on a sweet, cinnamon crumble topping to provide a bit of texture and aroma and really makes things extra indulgent.

This brioche French toast casserole is the perfect recipe when you're looking for a quick, throw-it-in-the-oven breakfast for the next morning, or would like to enjoy some breakfast for dinner like me!

Here's a sneak peek at my recipe for Brioche French Toast Casserole: (or just jump to the full recipe...)

Soft and puffy, this brioche French toast casserole with cinnamon crunch topping is an easy way to serve up a favorite breakfast staple!

Cook's Note: This recipe was originally published in 2018, and has been updated with even more love!