If you love pizza and you love chicken masala, then you'll really enjoy my tasty mash up of the two with this naan pizza. Prepared with soft naan bread as the crust, a layer of masala sauce, plus strips of masala marinated chicken, onions, mozzarella cheese and fresh herbs, this naan pizza recipe is absolutely brimming with tantalizing flavor! 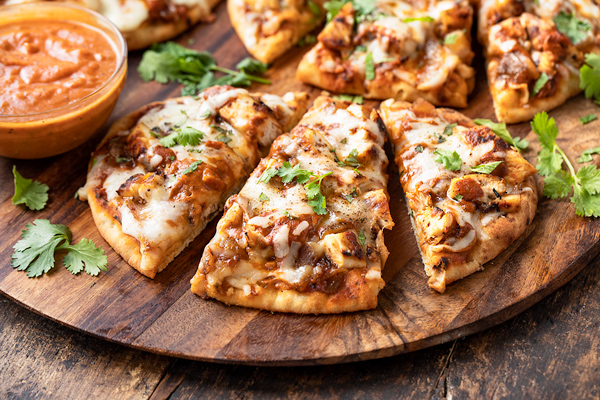 A Scrumptious Mash Up of Two Favorites

Making pizza at home is such a fun and creative activity, and one that truly has no “rules”.

From the crust, to the sauce, to the toppings, the options are pretty much endless when it comes to pizza, and we need only use our imagination and our cravings as a guide.

Feeling a bit playful lately, and craving a “mash up” recipe to sink my teeth into (both literally and figuratively), I thought of creating a fun and simple new pizza recipe for our next pizza night at home, offering a bit of a nod to one of our favorite cuisines: Indian.

When we go out to eat at our favorite local Indian restaurant, I'll often order up chicken masala, that mildly spicy, saucy chicken dish brimming with the flavors of ginger, garlic, onions and masala spices.

And of course no Indian meal would be complete without at least one order of the naan bread, with its soft and perfectly chewy texture.

So when thinking about this new pizza recipe I wanted to play around with, I thought of using naan bread as the pizza crust, then spreading over some good quality, store-bought masala sauce over top (keeping it nice and easy).

I went ahead and also added some chicken marinated in masala, garlic and ginger to the mix as well, plus some lightly caramelized onions, mozzarella cheese and a flourish of fresh cilantro and mint.

Easy, semi-homemade, and absolutely mouthwatering, this naan pizza with a chicken masala “twist” is our latest favorite to whip up when we're craving a quick homemade pizza, one that's a bit unconventional yet totally irresistible!

My Recipe for Naan Pizza

While there may be many recipes for naan pizza, most often the pizzas feature a naan base with traditional toppings such as tomato sauce, sausage, pepperoni, etc.—basically, the toppings you'd find on a classic pizza.

But with my naan pizza recipe here, I'm going all out with a unique set of toppings and flavor profile...

I start with a soft naan base to use as our pizza crust, but in place of traditional marinara or tomato sauce, I'm going in a different direction: masala sauce.

To keep things quick and easy, I'm using a good quality, organic, store-bought masala sauce, and spreading that over the slightly-toasted naan bread.

Then, that gets topped with a touch of cheese, juicy strips of seared or grilled chicken, marinated in an aromatic combination of masala sauce, ginger and garlic, plus a layer of lightly caramelized onions.

I'm opting for creamy mozzarella cheese here (though traditional Indian paneer would be a terrific alternative if you can find it), then finishing everything off with a flavorful combination of fresh cilantro and a touch of mint.

I even like to sprinkle over some garam masala spice to finish the pizza, but this is totally optional.

This naan pizza is so delectable!

Here's a glance at my naan pizza recipe: (or just jump to the full recipe...)

This naan pizza is a mash up of pizza and chicken masala, topped with masala sauce, masala marinated chicken, onions, cheese, and fresh herbs!