This rich, flavorful and brothy version of potato leek soup is a bit of a departure from the more traditional creamy, blended version. And, it's made extra filling and savory from the addition of delicious smoked sausage! 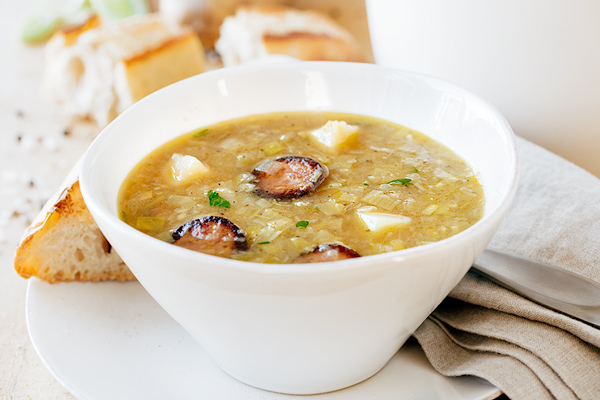 Potato leek soup is one of those soups that traditionally gets blended to a smooth, creamy finish, which is the way that we often find it offered up in recipes or on a restaurant menu.

But I've found that leaving this soup on the brothy side, and adding in some savory smoked sausage, is an absolutely heavenly way to prepare and enjoy it. It's so hearty and flavorful that way!

So the recipe I'm sharing here is my slightly lighter yet more savory take on the classic leek and potato soup. And because I preserve the rich broth, it allows the potatoes, the leeks, and that juicy smoked sausage to be seen and their unique textures and flavors to be tasted. 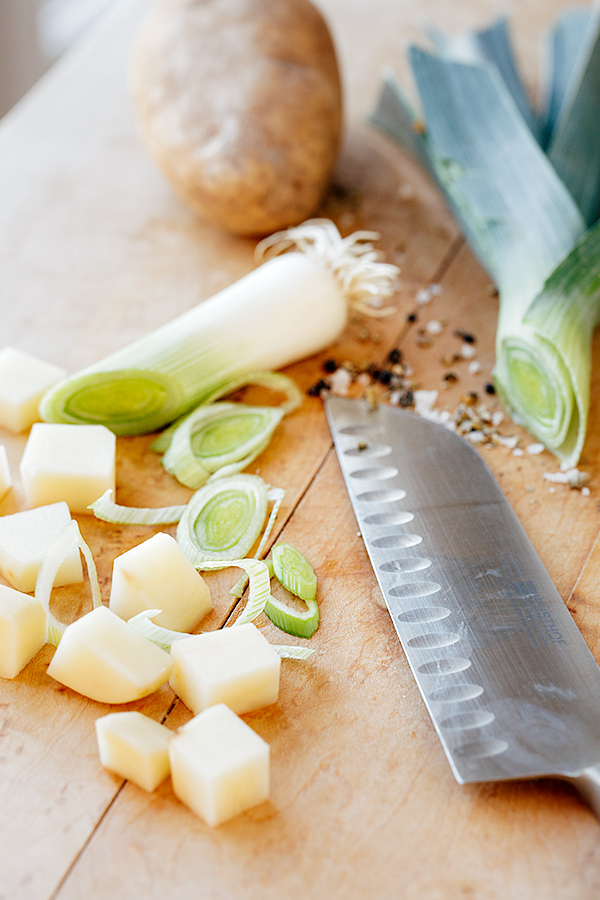 The ingredient list for this recipe is on the short side, and I love that.

This is a quick-cooking soup (right around 20 minutes!). The ingredients are layered into the pot and simmered just until tender, creating lots of big, bold flavors, not to mention that hearty texture that'll leave bellies happy and feeling satisfied.

I find that serving this soup with warm, rustic bread on the side makes it not only a complete meal, but also super cozy—it truly needs nothing else! 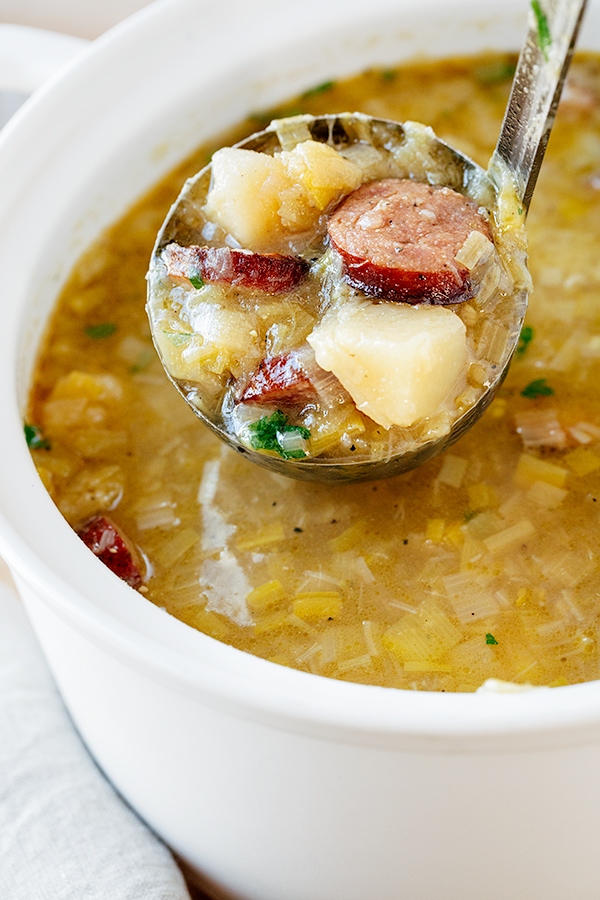 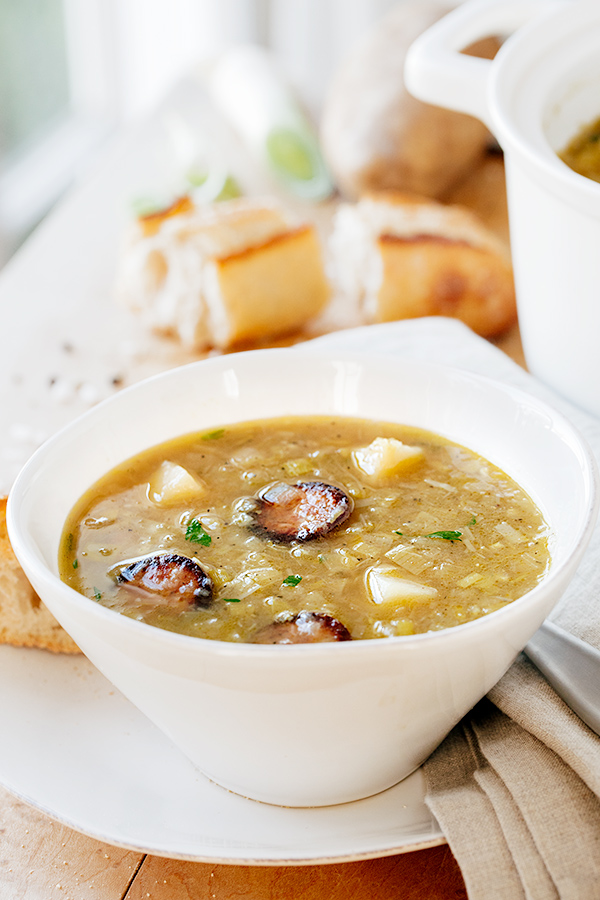 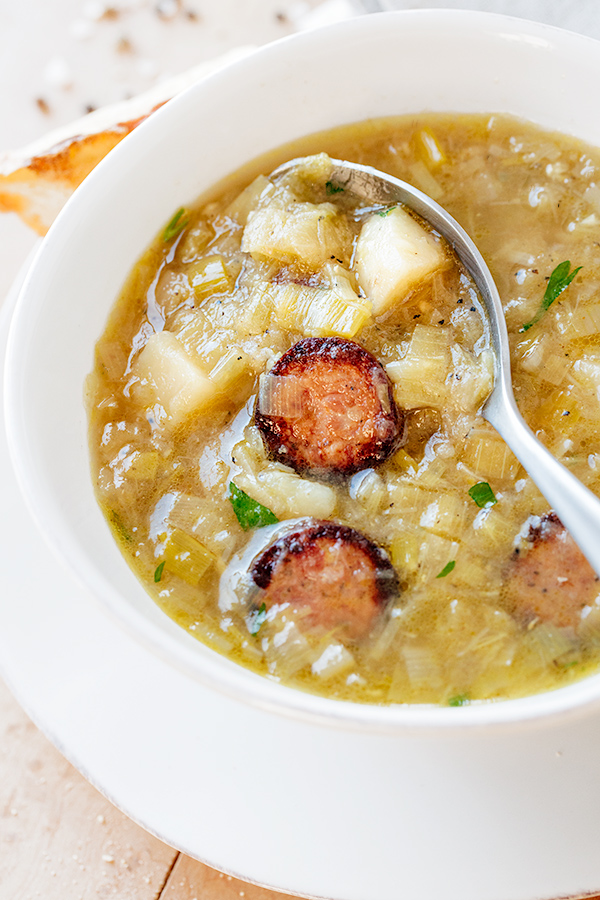 -Place a large soup pot over medium-high to high heat, and drizzle in about 2 tablespoons of oil; once the oil is very hot, add in the sliced smoked sausage, and leave it undisturbed for a couple of minutes to allow for it to caramelize and get some good color; then stir, and allow it to caramelize some more for several minutes.

-Once the sausage is browned, drizzle in a little more oil (if the sausage is not too greasy already), and stir in the sliced leeks; it may seem like a lot of leeks, but they will cook way down as you allow them to also caramelize and get golden with the sausage, about 10 minutes, or so.

-Once the leeks are golden-brown, add in the garlic, a pinch of salt and black pepper, and stir just until the garlic becomes aromatic; then, add in the potatoes, along with the hot chicken stock, and bring to the boil.

-Reduce the heat, cover with lid just partly askew, and allow to simmer for about 20 minutes, or until your potatoes are tender.

-Finish with the lemon juice and the parsley, and serve with some good bread.

Hungry for more soups? Check out this Chorizo Soup, this Italian Vegetable Soup with Spicy Sausage, and this Beef Barley Soup!

And if creamy soups are your thing, try my Carrot Ginger Soup or my Tomato Basil Soup!

Cook's Note: This recipe was originally published in 2016, and has been updated with even more love!